How to Prevent Subway Flooding: Materials Science and a Big-Ass Plug

Fifty billion dollars is the Hurricane Sandy damage estimate for the New York region. Which is nuts; it means if we spent $49.5 billion on defensive measures, we'd still be $500 million ahead.

Of course, even if spending that much were politically possible, we'd never be able to anticipate and design solutions to every single problem. But that doesn't mean people aren't trying. One major issue is being addressed with a fascinating potential solution: The Department of Homeland Security's Science and Technology Directorate is hoping to reduce subway flooding by installing gigantic, inflatable plugs.

If this problem and that solution were presented to you at design school, you'd quickly home in on the two big issues: Materials and deployment. What are the things made out of, and how do we get them into place? At first I thought the same thing all of you probably did—we deploy Jose Carreras and a team of Metropolitan Opera singers into the tunnels during a hurricane, and put them to work blowing up gigantic balloons that only their lungs could fill—but the DHS went a different route.

Their man with a plan is Dr. Ever J. Barbero, a professor of mechanical and aerospace engineering with a specialty in advanced materials. (He's been working on the problem for years, prompted half a decade ago by a surprisingly prescient DHS.) During his materials research phase Dr. Barbero contacted a company called ILC Dover, which is like a super design-build firm specializing in product design for government and industry—they made the airbags for earlier Mars Rover landings—and they recommended he use Vectran (even though I believe Jose Carreras is allergic to it).

Vectran is technically known as an "aromatic polyester"—I don't like the sound of that, but it probably can't make the NYC subway system smell worse—and it's comprised of fibers spun out of a liquid crystal polymer. It's moisture-resistant and "stable in hostile environments," so we could even use it at that sketchy J-train station at Sutphin Boulevard. It's typically used as a reinforcing material in boat sails, ropes, high-end bicycle tires, and even woven into the strings of rackets made by Yonex for badminton, a sport I'm told Jose Carreras is quite good at.

Says the Department of Homeland Security of the Resilient Tunnel Project, as it's officially called:

In Dr. Barbero's early trials, he had an enormous spherical plug made of the stuff—and it tore right down the middle during testing. The water pressure in a flooding tunnel is apparently very high, unlike in my shower. Barbero then doubled down on the layers, adding an inner polyurethane bladder, and added a third layer on the outside made from Vectran belts woven in a cross-hatch pattern, like those Nike Innevas. The idea is that if one belt failed, the surrounding ones would prevent a catastrophic failure. But there is more testing to be done, with an estimated several more years before the thing is ready to go.The neat thing about the inflatable plugs, which are shaped more like aspirin capsules than beach balls, is that they have a measure of give to make up for inconsistencies in the shape they're plugging. Dr. Barbero's plan calls for some of the larger obstructions to be smoothed over in the brief cross-section of tunnel in which they reside—for example, filling the gap between the tracks with concrete for that little stretch—and it's okay if it's not totally watertight: If a little water seeps in, as it inevitably will, a crew can still manageably pump that out at a rate that will prevent system failure. 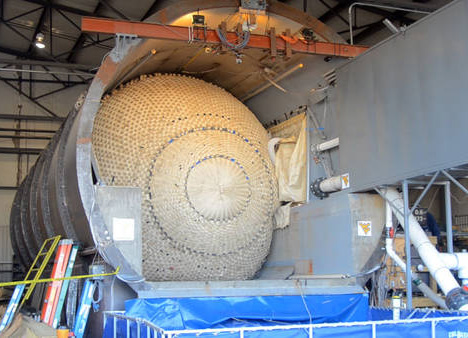 The thing we didn't cover yet is deployment. The current plan calls for plugs to be placed, in deflated form, at multiple intervals along the wall of each tunnel. In the event of an emergency, someone that isn't Jose Carreras hits a red button and a network of air pumps goes into action, inflating the plugs in 30 minutes or so. But designers don't always get what they want, of course, and Dr. Barbero's original deployment scheme was far cooler:

"[The] initial idea was to put plugs on rail cars so that they could be sent to any location, as needed," reports The New York Times. "'That sounded really far-fetched' to Homeland Security officials, [Dr. Barbero] recalled." Well, when Jose Carreras was six years old and told his parents he would one day sing like Mario Lanza, I'm sure that sounded far-fetched too.

How to Prevent Subway Flooding: Materials Science and a Big-Ass Plug