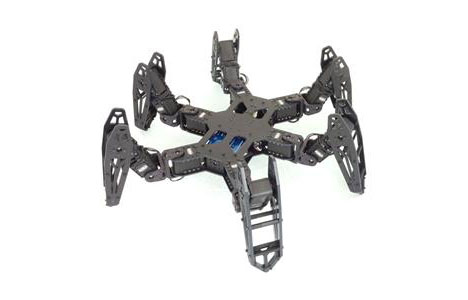 It's been a while since I wrote a damning piece about robots, because there hasn't been anything robotic to scare me witless in quite some time.

Well that's changed now, thanks to the Trossen Robotics Community, a "one stop robot shop" responsible for the unholy monstrosity you see here. No thing on Earth and under Heaven ought move like this; it alternately scuttles with the grotesque urgency of a cockroach and the obscenely suggestive swaying of a strip club pole dancer. And unlike a marauding giant spider, it is the exact same creature when you flip it over, rather than being incapacitated. It is unstoppable and it is an abomination. Look upon it:

To the designer of this PhantomX Hexapod that retails for a fairly reasonable $1,199.95: I do not appreciate, sir, the wicked and sensuous way that the robot moves in the beginning of the video, its frightening ability to accelerate, its freakishly quick ability to rotate in a clearly menacing way, its disturbing rotational symmetry in all axes. I will not be fooled by the presence of children in this video, and when all of humanity toils under the yoke and direction of millions of self-assembled creatures like these, I will say, "I told you so."