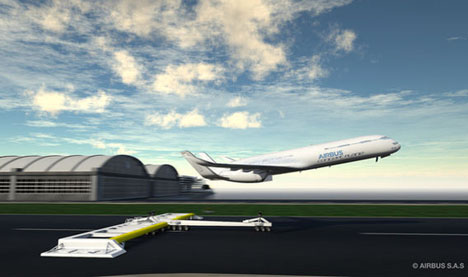 While many eyes in the commercial airline industry were undoubtedly watching the U.S. Navy's EMALS (Electromagnetic Aircraft Launch System) testing, it is Airbus that has first stepped forward suggesting commercial applications. Earlier this year the manufacturer announced "Smarter Skies," a series of concepts and promotional videos revealing where they want to be by 2050.

One component in their plan is for an EMALS-like system, though they never directly refer to military subcontractor General Atomics' invention; instead the company calls it "Eco-Climb," writing that "Aircraft could be manoeuvred onto a track system and accelerated using either electro-magnetic motors built into the track or an inductive circuit within the aircraft itself." Starting at 0:52 in the promo video below, you can see they're envisioning a much wider platform than what EMALS uses, this one scaled up to accommodate a commercial jetliner:

In the previous entry we looked at the advantages of EMALS over steam-driven catapults; but what's the benefit of having an electromagnetically-propelled takeoff, rather than a conventional one, for a commercial airliner?

Listen to the changing sound of engines during flight and it's obvious: an aircraft draws on its power reserves more during takeoff than at any other time... However, this takeoff power only is required for a very brief portion of the total flight. Once cruising in the sky overhead, an aircraft doesn't need as much to maintain altitude. So why not source the energy required at takeoff from an innovation installed on the ground?

An assisted takeoff - using some form of propelled acceleration - would mean aircraft could be lighter, with smaller engines consuming less fuel...A continuous "eco-climb" would further cut noise and CO2 emissions....

With less time and distance required for takeoff, the runways could be shortened by up to 1/3rd, minimising land use, and enabling airport capacity to increase or new micro-airports to emerge. These could be located near city centres - or the mega-cities that will become a reality - with space becoming even more of a premium.

It's been more than a century since the Wright Brothers needed a catapult to get their contraption to fly. They would undoubtedly be astonished to see us circling back to the same concept, and Airbus envisions a twist Wilbur and Orville might not have signed off on: "The ultimate, albeit very extreme, concept," the company writes, "is to have a system that not only launches but also captures the aircraft, removing the need for landing gear." Gee, what could go wrong?