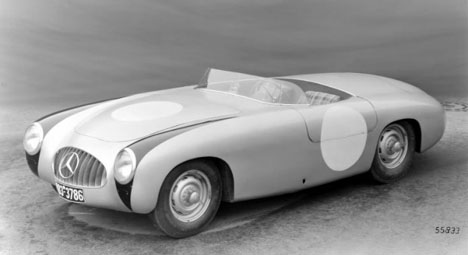 World War II put a lot of things on hold, among them, international auto racing. Mercedes, or rather Daimler-Benz as it was then known, stopped producing racecars and started producing war materiel sometime around 1939. But by the 1950s the world was getting back on its feet, and Mercedes was flexing with the 1951 release of their Type 300. The company higher-ups decided it was time to get back into the racing game.

Before the war, Mercedes had dominated European Grand Prix racing with a car that set an astonishing 270 mph speed record. But for their 1950s re-entry their budget was small, and they had to make do with what they had. And what they had was the Type 300.

So it was that Mercedes engineer Rudolf Uhlenhaut was told he'd be building a racecar—using the engine and transmission from the Type 300. That car's three-liter straight-six was good for 115 horses in stock form, which was fine for the road-going Type 300, but underpowered by racing standards. (The Mercedes racecar of 1939, for contrast's sake, was half the size and produced nearly two and a half times the power.) Uhlenhaut and his team tweaked the engine to squeeze 60 more horses out of it, but no racing enthusiast in their right mind would say 175 horsepower was enough to bring home a championship.

Even worse, the engine was as big as it was heavy: The tall engine block fit neatly into the ship-like hood of the massive Type 300, but in the racing scene low, aerodynamic styling was coming into vogue. Uhlenhaut's problems—a big, heavy, and underpowered engine meant to fit into a sliver of a car to win races—provided quite the design challenge.

Luckily for Mercedes—and later, a generation of car collectors—Uhlenhaut was equal to the task. For the W194, as the racecar was known internally, he and his team drew up the wind-cheating, bullet-like shape seen here:

To shoehorn the relatively massive powerplant inside, they decided the engine would have to be tilted 50 degrees to one side: 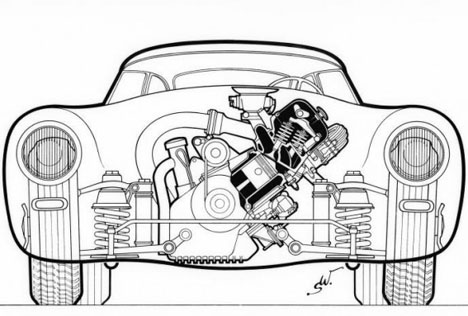 Note the tight fit, and how the center of the hoodline arches just enough to accommodate the air filter. Form follows function indeed. 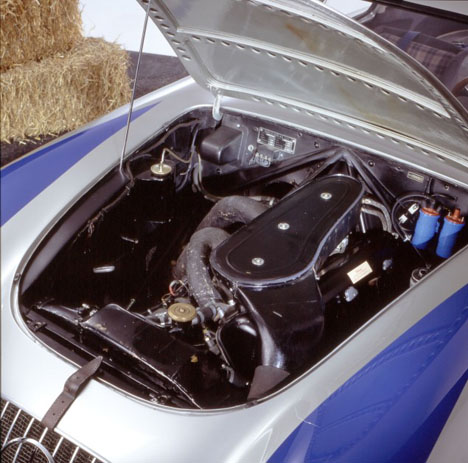 Then there was the problem of the engine and transmission's heavy weight and low power. Under those restrictions, the only way Uhlenhaut could make the car fast was if the rest of it was built using some kind of innovative, lightweight method.

Uhlenhaut calculated that he could make a super lightweight frame, that still had the desired rigidity, by using a concept bicycle manufacturers would find familiar: take a bunch of tubing and weld it together in triangle formations. I should point out that no documentation exists saying Uhlenhaut was directly inspired by bicycle frames, but take a look at the picture below and decide for yourself:

The resultant frame, and Uhlenlaut's pattern of triangles, yielded exceptional torsional stiffness, which was what he was after. And astonishingly, the frame by itself weighed a shockingly low 82 kilograms—that's 180 pounds, or not much more than what the driver would weigh. (Some insist the frame only weighed 50kg—a piddling 110 pounds.)

The car was then clad in aluminum, to further keep the weight down. And just nine months after project W194 was greenlit, Mercedes was back in the Grand Prix for the first time since the 1930s.

In that year, 1952, the results were nothing short of astonishing. Mercedes fielded multiple W194s at a race in Switzerland's Bern. They won first, second and third place. Next a pair of W194s took first and second place at the grueling 24 Hours of Le Mans in France. Back in Germany, they again took 1st/2nd/3rd at Nurburgring, which was considered one of the world's most demanding courses. Then, across the ocean in Mexico, a W194 won the Carrera Panamericana.

Mercedes had seemingly come out of nowhere with this amazing, radical new racecar that was a de facto victory machine. Race fans now knew the car by its public name, the 300 SL ("300" referring to both the 3-liter engine and the Type 300 from which it came, and "SL" standing for Sport Leicht, "Super Light"). Its reputation began to spread. 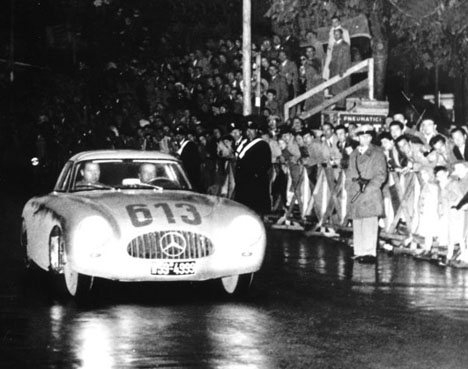 In New York City, newspapers carrying news of Mercedes' victories made their way onto the desks of interested parties. One of those interested parties was a shrewd businessman with no design background whatsoever. But he had a newly-formed connection with Mercedes, and an idea that would later cement his place in auto design history. Stay tuned.

The Origin of the Mercedes 300SL Gullwing
» Intro: Why a Car Collector with a One-Car Collection Is the Richest of Them All
» Part 1: The Type 300
» Part 2: The W194
» Part 3: Mercedes Gets Convinced and Heads to New York
» Part 4: The Gullwing Today