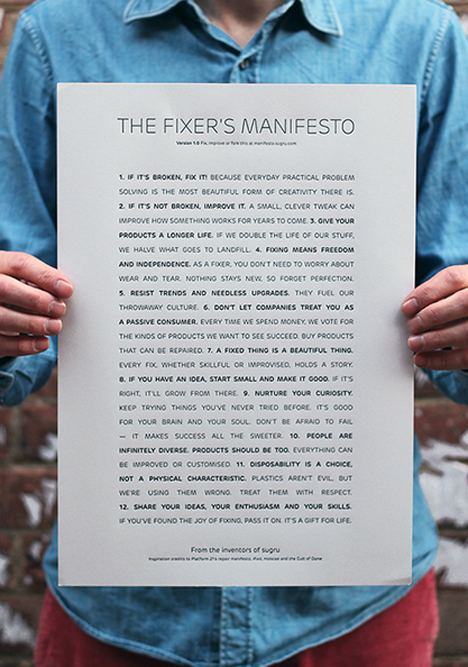 Just as the general goodwill of holiday spirit permeated the ether last week—like a redolent apple pie fresh from the oven—so too did its economic doppelganger launch its annual assault on wallets throughout the First World as early as last Thursday. Our own gift guide notwithstanding, we're pleased to see a decidedly anti-consumerist 'product' from the folks at Sugru: the Fixer's Manifesto.Fixing is the unsung hero of creativity. And it really shouldn't be. It's the most common, humble and beautiful form of creativity. Let's wear that belief proudly. Let's notice and celebrate these little everyday triumphs, and help others see their value. We made this to fuel the conversation about why a culture of fixing is so important. 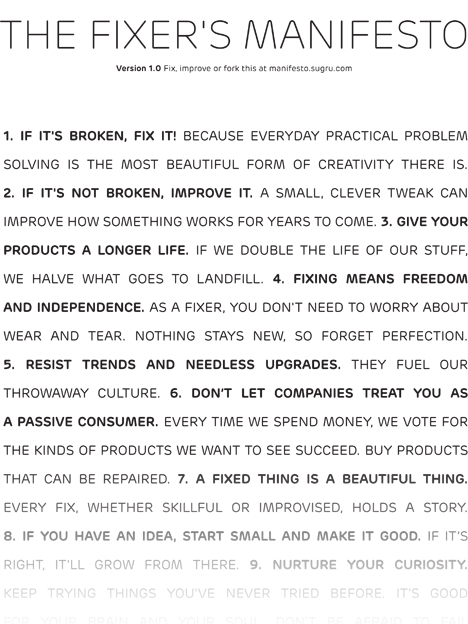 In keeping with the open source ethos behind the Manifesto, Sugru invites fellow fixers to do what they do best: "...We're pretty sure you won't agree with all of it, and you'll want to fix it. So this is version 1. There are plain text (Markdown), EPS, and PDF copies on GitHub, where you can contribute improvements, fork the manifesto, or make stuff with it." And while the team at Sugru thank Holstee Manifesto (among others) for inspiration, it's also worth revisiting Dieter Rams' 10 Principles of Good Design. 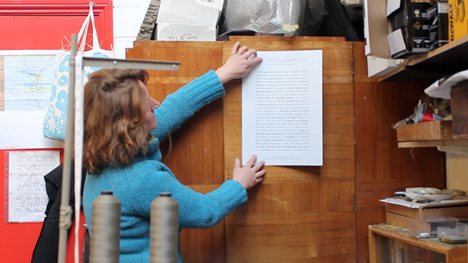 But it goes beyond whether it's (or you're) broke: whether it's a case of elevating ordinary things to forever objects or rescuing no-longer-made-but-entirely-serviceable equipment, resourceful DIYers are rediscovering an instinct to preserve, restore and ultimately endure in the face of the prevailing tide cheap mass production. Thus, the Fixer's Manifesto is but one manifestation of a slow but welcome (if not altogether necessary) sea change towards conscientious consumption.