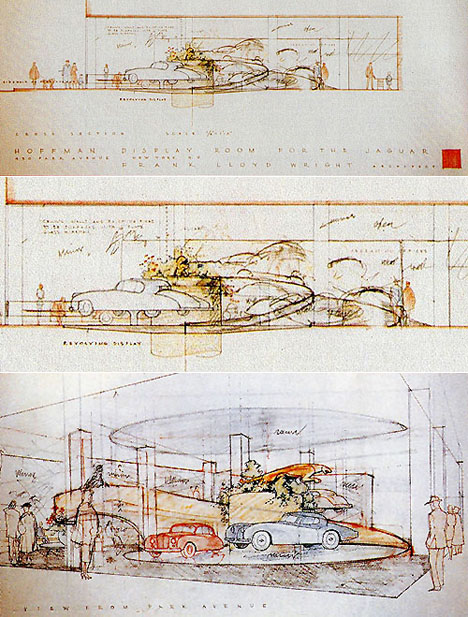 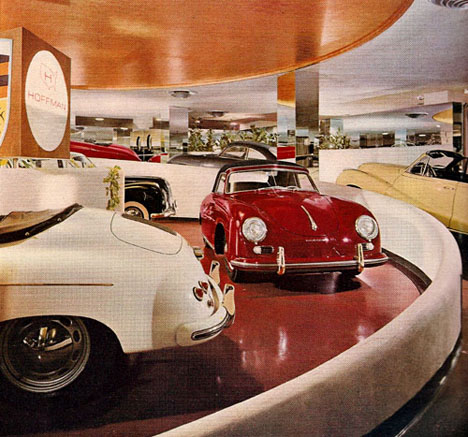 If this was The Daily News, I'd lead off with the sensationalist headline "Frank Lloyd Wright Fathered More Children Than New York City Buildings!" But while that's the truth, it's hardly noteworthy; of his more than 1,000 commissions, he only accepted three in Gotham—one house in Staten Island and just two spaces in Manhattan.

One of those spaces was the Hoffman Auto Showroom on Park Avenue, completed in 1955. Though tight by auto showroom standards at just 3,600 square feet—this was in Manhattan, after all—the space contained plenty of drama. The main room was dominated by an ascending, semicircular ramp that encircled the de rigeuer rotating auto platform. 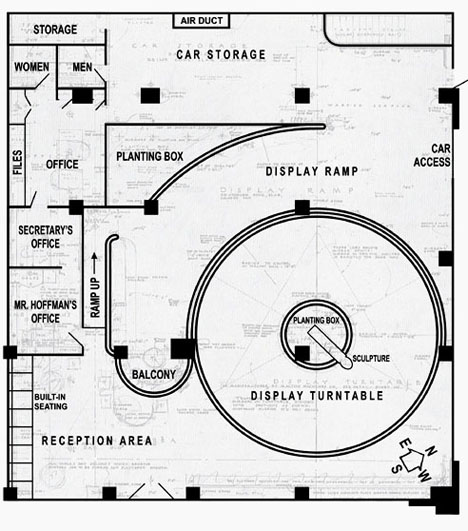 The rotating platform was large enough to fit four cars on it, bringing each one around like a sushi restaurant for auto enthusiasts. The upwards-sloping ramp could fit another three cars, and also had space for customers to walk between the cars and the barrier, allowing them to ascend the ramp and view the cars on the platform from above. 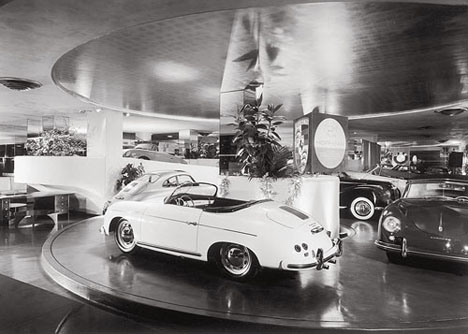 Sound familiar, that bit about the curving wraparound ramp? The Hoffman Auto Showroom has been described as a "forerunner" and "precursor" of Wright's design for the Guggenheim, as the former opened in 1955 and the latter broke ground in 1956. But while that's semantically accurate, it might give you the misimpression that the Guggenheim's ramp was inspired by an automobile showroom. Which is not true. Those of you who've sat through interminable semesters of History of Architecture will recall that Wright spent over a decade on the Guggenheim design. Three out of four of his original Guggy sketches, from 1943 and ’44, featured the wraparound ramp. It's more than likely that the Guggenheim design influenced the Hoffman showroom, and not the other way ’round.As it turns out, Hoffman would run the showroom for less than three years. Originally intended as a Jaguar showroom, through a wrinkle of fate it came to house vehicles from Hoffman's Porsche and Mercedes contracts instead; and in 1957 Hoffman negotiated a Mercedes handover for the space.

Mercedes continued using the space as their Manhattan showroom over the ensuing decades. Unfortunately the ’80s finally happened, and Wright's design was glazed over with mirrors: 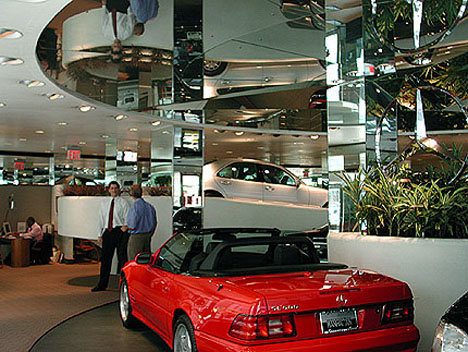 Threat of vampire invasion thus defeated, the space continued on as a Mercedes showroom. Below is a photo of it from this year, 2012. As you can see, the planter in the center of the rotating platform has been grossly expanded since Wright's time. (The ramp, unseen in this photo, remains intact.) 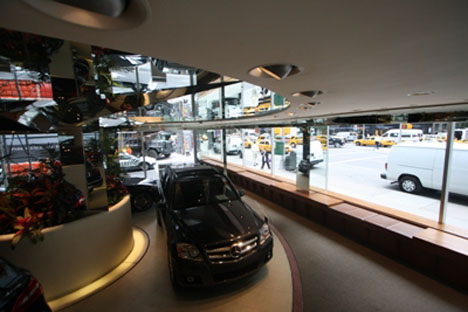 Sadly, Mercedes has announced they'll be vacating the space at the end of the year. Brokers assume another auto dealership will sign the lease, though financial rag The Commercial Observer reports "[a Mercedes showroom attendant] said that motor powering [sic] revolving track has long been broken."

Whether it's an auto dealership or another type of business that takes the space over, with any luck the fact that it came out of Frank Lloyd Wright's pencil will stay any thoughts of doing a demo-and-reno. But it's New York, and you never know what will happen; the city has a history of dynamiting iconic structures, like the Singer Building we'll get to in a future entry. (If you ever want to depress your architect buddies at a cocktail party, read The Creative Destruction of Manhattan beforehand to arm yourself with statistics.)

There's just one more design factoid in this story that you might be interested in, and it has to do with a rather prominent decoration within the original Hoffman Auto Showroom. We'll get to that next.