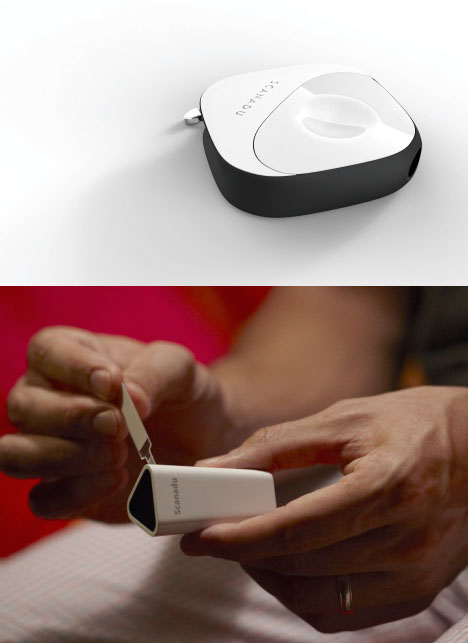 If you feel ill, there's a few things you can do: Put a hand on your forehead to see if it's hot, try to decide if you just ate a bad piece of codfish, maybe stick a thermometer in your mouth. In our homes that's about it, and the thermometer—which was invented in the 19th century—is probably the most recent consumer product design we have to monitor our own health. And that's absurd, particularly when we're all carrying supercomputers in our pocket for making Facebook updates and the like.

A company called Scanadu aims to rectify this, by providing health-monitoring products that link to your smartphone. The company launched just over a year ago, and just this morning specific descriptions (though not a lot of images) of their three products have been revealed:

Scandu SCOUT Scanadu SCOUT is a small, speedy and affordable device that puts vital health information at your fingertips. Simply hold Scanadu SCOUT to the temple, and in less than ten seconds it will accurately read more than five vital signs. Data collected by the Scanadu SCOUT is uploaded to the Scanadu smartphone app via Bluetooth to show:

"Scanadu SCOUT lets users explore the diagnostic abilities of a clinic and conveniently puts them in your smartphone for less than $150," said [company founder Walter] de Brouwer. "It's like having a doctor in your pocket."

Project ScanaFlu Project ScanaFlu is a low-cost tool that uses the smartphone as a reader to assess cold-like symptoms quickly, removing the guess work from early diagnosis of upper respiratory infections. By testing saliva, the disposable cartridge will provide early detection for Strep A, Influenza A, Influenza B, Adenovirus and RSV.

Here's what the devices promise:

Looks pretty awesome, no? But we'll have a while yet to wait; Scanadu says all three will be ready by the end of 2013.