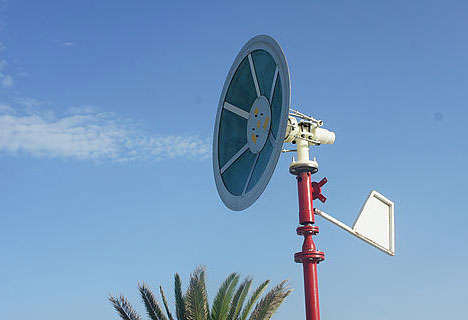 I've read that during the Industrial Revolution, it took a special kind of mind to envision the types of actions machines could perform. For example, early attempts to create sewing machines attempted to mimic the act of two human hands passing and plucking a needle back and forth through fabric, and those attempts failed. The purely mechanical needle, hook and shuttle system still used today was what worked, and it was difficult for all but the most gifted to work those futuristic actions out on paper.

It takes a similarly rare level of brilliance to look not forward, but backward, to find an older technology that can solve a modern-day problem. And a Tunisian start-up company called Saphon Energy has done just that, by designing a wind-capturing device that eschews the windmill form factor—a 400-year-old invention—and going with one at least 5,000 years old: the sail.

Windpower is arguably the greenest of the green, but one reason it's not seeing massive uptake is that the turbine form factor is inherently problematic. They're expensive to manufacture, noisy, and inefficient. Saphon Energy's innovation is a simple disc-shaped sail that catches and dances in the breeze. The shifting energy this produces at the mounting point is captured and either stored or immediately converted to electricity.

Hassine Labaied, a Dubai banker with ties to Tunisia, was so smitten with the promise of Saphon Energy's "Zero-Blade Technology" that he quit his 12-year finance career to pursue, as it were, a career in sails and marketing. Now serving as Saphon's CEO, in the TED talk below he outlines the surprising statistics that make Zero-Blade look like a good bet: