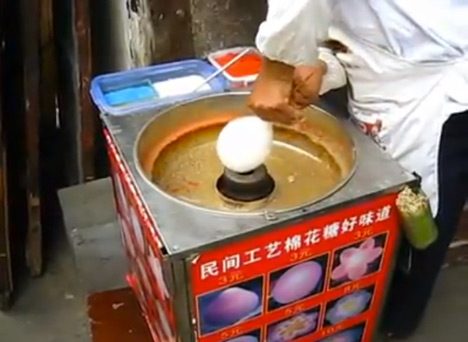 This video is interesting on a couple levels, but I won't ruin it:

According to the sign in the closing shot of the video, the cotton candy flower costs five yuan, or about 80 cents at the current exchange rate. Upon a bit of research, I was interested to learn that the treat debuted at the 1904 World's Fair for the hefty sum of 25 cents a box—the equivalent of about $6.00 today. Confectioner John C. Wharton filed a patent for the first cotton candy machine in 1899 with the help of dentist William J. Morrison (irony aside, there is at least one research paper dedicated to the life and times of the sometime lawyer, author and inventor). In any case, the Nashville-based team sold nearly 70,000 boxes of "Fairy Floss," as it was called back then—a second dentist, Joseph Lascaux of New Orleans, LA, devised a similar machine in 1921, when he coined the term 'cotton candy' (no word on whether infringement was an issue back then). 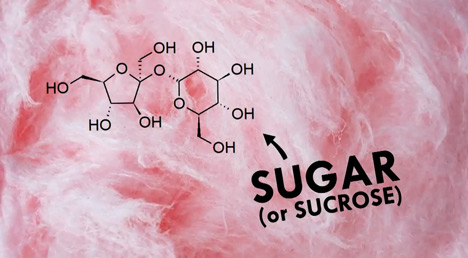 As for the gauzy treat itself, cotton candy is essentially melted sugar that is rapidly cooled in a centrifuge as gossamer strands are collected along the edges of the bowl. Here's a short and sweet vid of the 'traditional' way of making it:

(I don't know much about BytesizeScience, the production company behind the video—indeed, the "About" portion of their YouTube channel is empty—but it's fairly well done and edited down to an easily consumable two minutes. I could do without the canned laugh track, but the star wipe kinda blew my mind the first time around.) 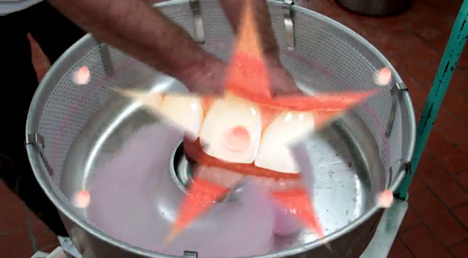 The curious thing about the Chinese cotton candy purveyor, then, is not so much his presentation but the fact that his machine appears to blow the sugary strands directly upwards. It appears that the centrifuge (you can see it start spinning at 0:10) is augmented by a fan—I'm no expert on fluid dynamics but it looks like there's an ethereal vortex directly above the aperture. It's also worth noting that the canny confectioner is continuously spinning the form, as a glassblower might, in order to maintain it's shape. 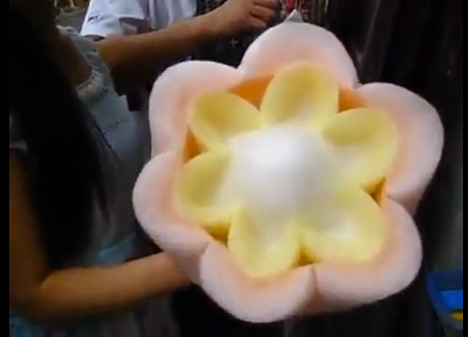 If the videos have whet your appetite for the fluffy stuff, here's a more in-depth history of cotton candy.