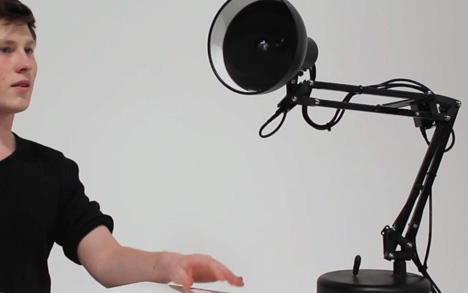 Pinokio is an exploration into the expressive and behavioural potentials of robotic computing. Customized computer code and electronic circuit design imbues Lamp with the ability to be aware of its environment, especially people, and to expresses a dynamic range of behaviour. As it negotiates its world, we the human audience can see that Lamp shares many traits possessed by animals, generating a range of emotional sympathies. In the end we may ask: Is Pinokio only a lamp? - a useful machine? Perhaps we should put the book aside and meet a new friend.

It's true that it doesn't yet hop around and crush the letter "i" into submission, but we're sure they're working on it.

Seriously though, I think the trio's project has some serious potential; when doing sewing machine repairs on my workbench, I'm constantly re-adjusting the swing-arm lamp to throw light where I need it at that moment. If the lamp could somehow track my eyes when prompted, leaving both hands free to adjust/remove/re-install the part I was working on, I'd pay good money for it. There's got to be craftspeople out there doing other types of benchtop work that would agree.