Where would we be without the connective tissue that is the Internet? Amazon connects buyers and sellers. eBay lets us transfer junk from one person's basement to another. Twitter lets ordinary citizens know what's on celebrities' minds, so we can force them to apologize for it. But there are still plenty of gaps, and designer/entrepreneur Matthew Burnett is currently helping to close a big one: the one between entrepreneurial designers and domestic manufacturers.

When Burnett started up his Steel Cake watch line, he experienced headaches with overseas production. With his second start-up, The Brooklyn Bakery, he switched to domestic manufacturing—but learned that locating domestic factories was not always easy. This is as true as it is absurd; America is loaded with manufacturing facilities sitting idle—New York City alone is bursting with them—and you've never heard of any of them.

A personal, but relevant, aside: In my industrial vintage sewing machine hunting, I've visited HUGE manufactories in Brooklyn, gargantuan spaces in the tens of thousands of square feet, with one of them down to just four workers; lined up along the walls, dozens upon dozens of high-end manufacturing machines, some covered in tarps, others in thick dust. The owner of that particular factory knows a lot about fabrics, and doesn't know a damn thing about the Internet; I was the only fanatic to answer his terse, barely-literate Craigslist ad. And outside of that one ad, his factory has zero Internet presence. In short, he possesses tons of manufacturing capacity and a lifetime's worth of production experience, but no one knows he's there and his business is dying.

That factory is not alone, of course, and Burnett's latest venture aims to not only let you know they're there, but exactly what they're capable of and how you can contact them. Burnett's co-founded the newly-launched Maker's Row, which catalogues factories and materials suppliers, explains their capabilities, and in some cases introduces you to the actual people you'd be working with via produced videos. It's a brilliant idea—factory tours from the comfort of your laptop, searchable by product type, geography and keyword.

"As we were trying to expand [The Brooklyn Bakery]," writes Burnett co-conspirator Tanya Menendez, "we realized that there was a huge lack of transparency and community within the industry. It would take us months to find the right factory, so we decided to create Maker's Row to solve this problem."Our mission is to make the manufacturing process simple to understand and easy to access. From large corporations to first time designers, we are providing unparalleled access to industry-specific factories and suppliers across the United States. 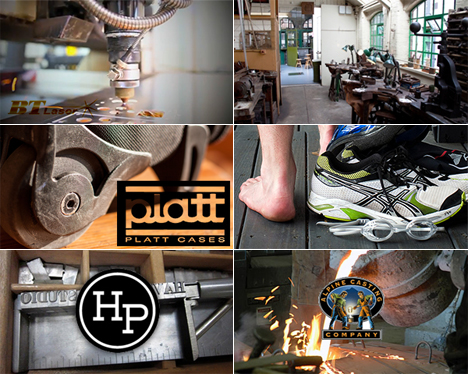 Burnett and Menendez, along with third team member Scott Weiner, have their work cut out for them. To start with they're focusing on apparel and accessories, but I'm hoping that with Burnett's ID background, it's just a matter of time before we start seeing injection molding facilities, tool cutters, metal fabricators, et cetera. (I've already spotted a California-based laser-cutting outfit and a metal casting joint in Colorado on their surprisingly deep list of factories.)

As a sample, here's one of their videos, from Manhattan belt factory Universal Elliot Corp: