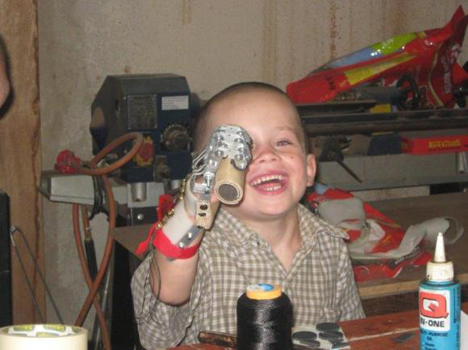 The worst thing I ever saw on YouTube was a guy accidentally taking his thumb off with a tablesaw. I used to drive an ambulance and I saw some pretty horrific things, but it is that video that still sometimes gives me trouble sleeping.

Now I've finally come across some videos that make up for the aforementioned one. Here's the background: Richard Van As, a woodworker from South Africa, lost his fingers in a woodworking accident.Instead of giving up hope and resigning himself to never having fingers again, he went in search of someone that might be willing to help him replace them. After finding himself faced with having to come up with $10,000 per finger for commercially available prosthetics—he decided to search for someone that could help make a set of his own.

He found a Washington-State-based propmaker named Ivan Owen, who created a mechanical device Van As could use to manipulate fine items. Here's a video of Richard testing the device:

Following the design's workability, Owen and Van As decided to open-source their "Robohand" design, to ensure the economically-underprivileged folk who need one can afford it. (A post outlining the overall design is here.) One of the first beneficiaries is a South African boy named Liam, who was born with no fingers on his right hand. Owen and Van As set about kitting him out:

Liam's Robohand is a work in progress. You can view updates or contribute yourself at Owen and Van As' website, cheekily named Coming Up Short-Handed.