Me Yourself with 3D Printing 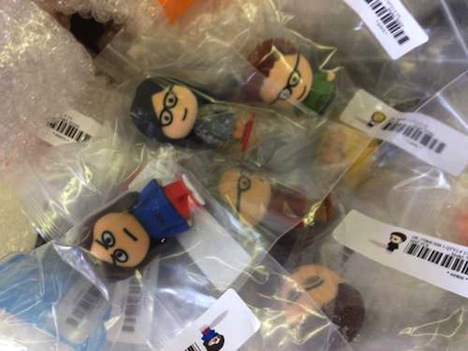 The first batch of Mixees arrive from the printer. All images courtesy of MixeeMe.

Custom avatars have always been an addicting form of participatory making. From the famous Nintendo Miis to Mad Men Yourself and South Park Avatar Creator, avatar-making has proven to be a popular practice online time and time again.

But while we ourselves wander around a three dimensional wonderland, our avatars remain stuck in the second dimension. Even if, like Miis, they seem to be free, they can never quite leap from the screen and into our hands, at least not without considerable effort.

For all those avatars itching for entree into the real world, we now have MixeeMe, a new startup that allows you to create a cute, custom avatar of yourself, your friends, your nemeses or anyone else you know and get a real live 3D printed version in the mail a few days later. It's the brainchild of designers Nancy Liang and Aaron Barnet, two Yale grads who wanted to make a dream into reality.

"When I was little had this idea that if you could become an action figure you're successful, you made it in the world," explained Liang in a Skype interview with Core77. "I sat down at Google Sketchup, figured out how to make circles and cubes and put them together. After 5 hours, I uploaded my character model to Shapeways, and found that it would be too expensive to print. The modeling process was a shit show, basically."

Frustrated with the options for designing simple 3D objects, Liang took to the web and worked with Barnet to research and develop simple 3D tools. "I decided that only do I want to make action figures, I want to make it easy for others to make action figures of themselves or their friends," she noted. After exploring the different options, they decided on a simple interface that let customers focus on creating, rather than the technical specifics."We don't want to force our users to install any plugins or download any software because we want it to be easy to use," Barnet noted over email. The site's entire back-end runs on open source software. "So we decided to go with WebGL for the graphics. Not all browsers and machines currently support WebGL, but we see our decision as a longer term bet that we think will pay off as browsers improve (we do support flash as a fallback though via X3dom)."

Although 3D printing has reached a level of detail that would allow for quite realistic action figures, MixeeMe opted for cute over realistic. "With cartoons it's meant to be exaggerated," said Liang. "You don't fall into that uncanny valley."

The toys so far have been a hit, especially for the holiday season. Liang told me she's heard stories of people making them for loved ones. One couple made them for their wedding and took them along on their honeymoon for photos in different locations. An office had all their staff made into Mixees. Employees who turn their timecards in late got a Mixee on their desk as a reminder. 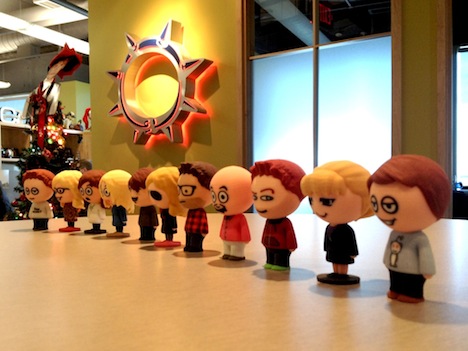 MixeeMe one of my favorite examples so far of the possibilities of 3d printing. Many Shapeways designers (Mixee relies on Shapeways for its printing), have created beautiful jewelry, dice and iPhones accessories. But if 3D printing has significantly lowered barriers for entry for industrial designers, I've been curious to find examples of how it's lowered barriers for entry for everyone else.

"I'm a big fan of 3D printing, but I've never been a sculptor," noted Liang, whose formal degree is in cognitive science. "It enables people like me to make physical items." And with MixeeMe's ease of use and fun features, she and Barnet have extended the joy of physical making to more people not trained in industrial or graphic design.

"We're super excited about 3D printing and where it's going," she continued. "There's a lot of enthusiasm. More and more people don't stare at me blankly when I say I'm in 3D printing. Modeling is hard so hopefully we can make it through that process and make it easier for them."

Me Yourself with 3D Printing