Here we go again: the nCycle is the first of what will hopefully be many new bicycle designs that will validate our measured optimism about electric bicycles in 2013. Designers Skyrill and Marin Myftiu are kicking off the new year with a new approach to bicycle design:The vast majority of current e-bikes are still 100+ year old designs converted somehow to electric, and you can tell it just by looking at them; to most people they still are almost the same, odd mix of tubes and wires and the extra electric hardware adds up in quite a clumsy way... Our lifestyles and needs have dramatically changed since the late 19th century and these structures today are unnecessarily complicated and [do not offer] the extra functionality required in our digital age. 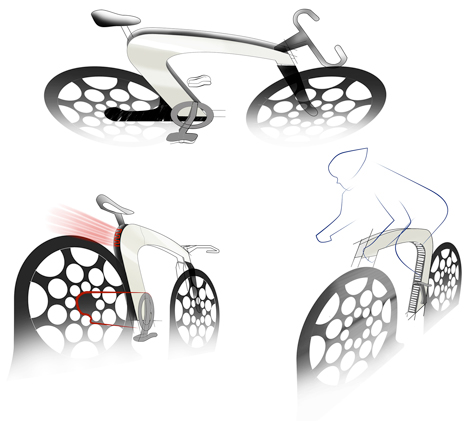 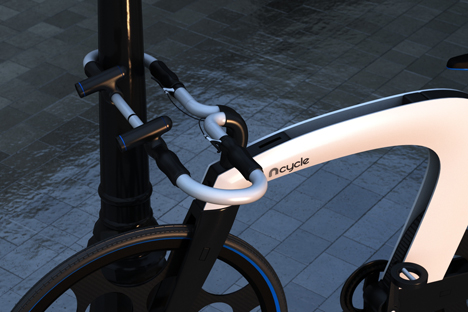 The result is a novel proposal for a bicycle frame that is constructed from a pair of side panels, which conceal a battery, storage compartment and an optional folding mechanism, as well as integrated safety and security features. Thus, the nCycle is intended to represent an electric conveyance that is "cheaper, sturdier, more flexible, easier to build and maintain." 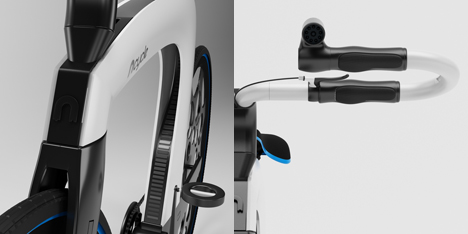 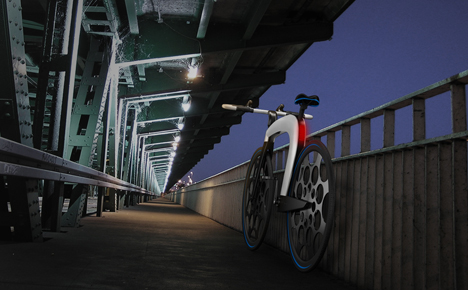 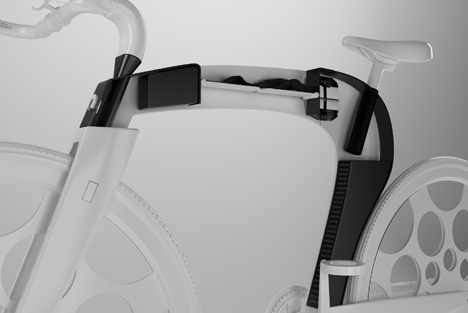 It so happens that we've seen many of its features across several Flotspotted bicycles: the sheet metal body echoes that of Jose Rivera's "Ice Cream" bike, while the (also optional) electric assist, with a battery pack integrated into the seat tube, as in Stefan Reichert's "E-Motion" bike for Kettler (among other electric bicycles in varying states of production-readiness). And as in Lee Jung Hoon's 'reversible' handlebar concept, the bars rotate on the axis of the flat section (i.e. the clamp area) to allow for multiple hand positions. 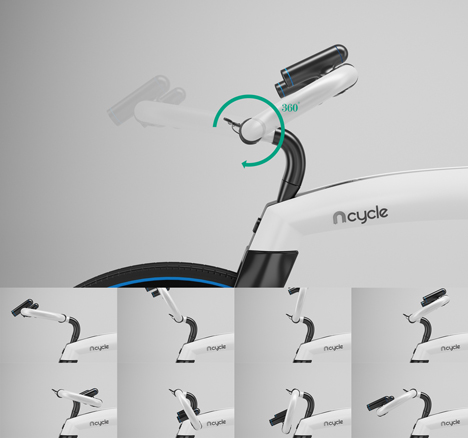 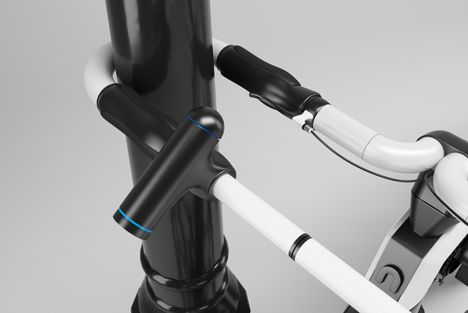 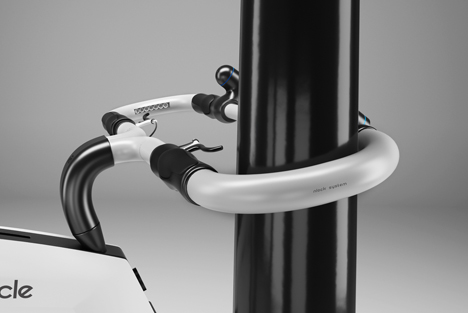 Additional features include an integrated lock—a telescoping bolt that closes the loop of the handlebars—and lights, as well as a built-in soundsystem. The speakers are integrated into the back of the headlights, streaming Bluetooth audio from one's phone, which can be docked in the horizontal section of the frame. 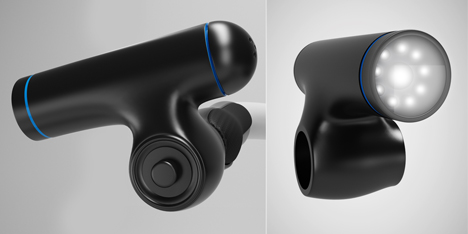 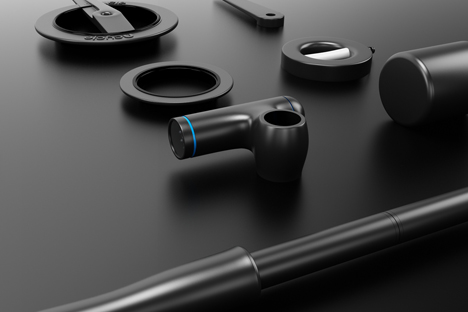 The description also mentions a holographic display on the handlebars, also linked to a smartphone; the app can be controlled via touch sensors embedded in the rubber grips. (As if to underscore the fact that this feature is a bit farfetched if not altogether superfluous, none of the images illustrate the HUD.) The electronic components draw power from a small onboard battery in the horizontal section of the frame, between the expandable compartment and cockpit. 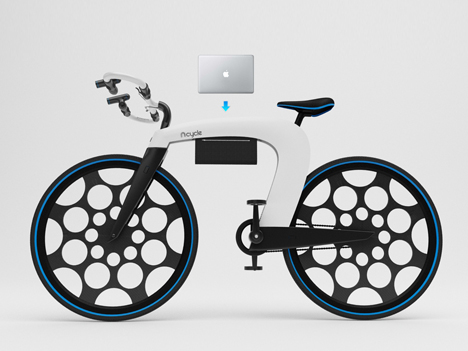 As for the optional hub-mounted motor, a separate battery plugs in to the vertical section of the frame, between the seatpost and bottom bracket. 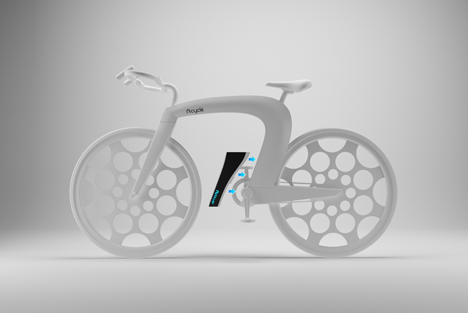 Where previously-seen concepts were designed expressly for convenience, incorporating electric assist and a folding frame frame, these features are upgrades from the base model of the nCycle, available at extra cost. 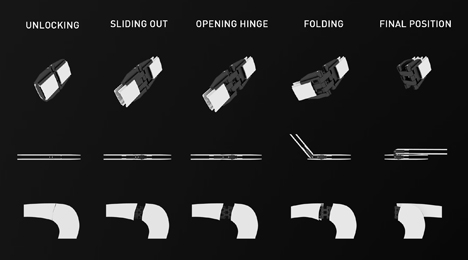 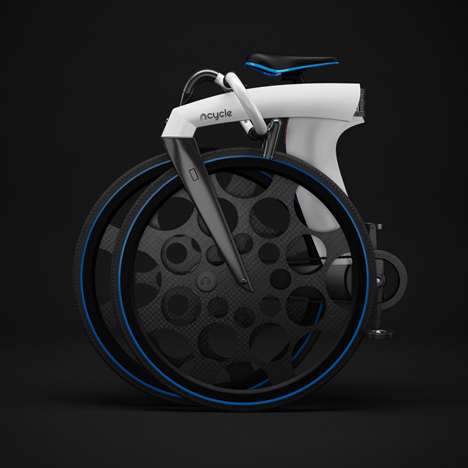 Moreover, I can't help but wonder if the boomerang-shaped frame rides like a regular bicycle, and I'm skeptical as to whether the nCycle, as shown in the renderings, would be significantly less expensive than extant bicycles, electric or otherwise. The wheels in the renderings appear to be made of carbon fiber, and I certainly hope that they're standard 700c clinchers to potentially bring the price down and facilitate maintenance. 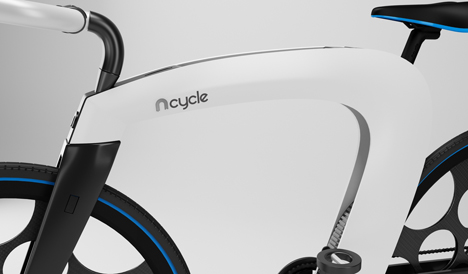 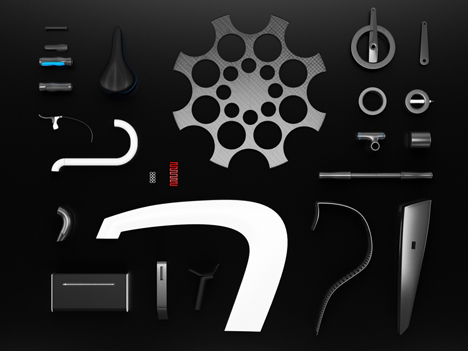 In fact, a couple of other oversights are red flags as to whether the Almossawi brothers and Myftiu actually ride bicycles on a regular basis. While I'll give them the benefit of the doubt regarding the invisible brake calipers, which could be concealed within the frame, I'm surprised that there's no mention of gearing, especially since internally-geared rear hubs seem to be all but standard for city bikes these days. And call me old fashioned, but I would take full fenders and a chainguard over a holographic HUD any day (...at least it doesn't have a belt drive, or—god forbid—hubless wheels...)

Also, is it just me, or do the brake levers look tiny? Not only are the levers barely long enough for two fingers, the cable housing looks like it comes in at the gauge of most standard cables... 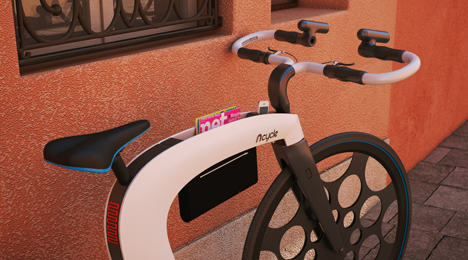 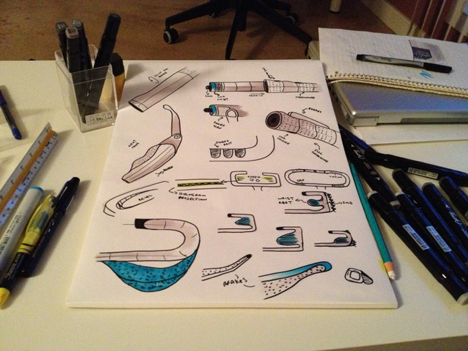 Back to the drawing board?

In fairness to the designers, these issues can still be fixed: after all, the nCycle remains a rendering for the time being. Does the unconventional construction merit further consideration for what might otherwise be deemed an exercise in styling?