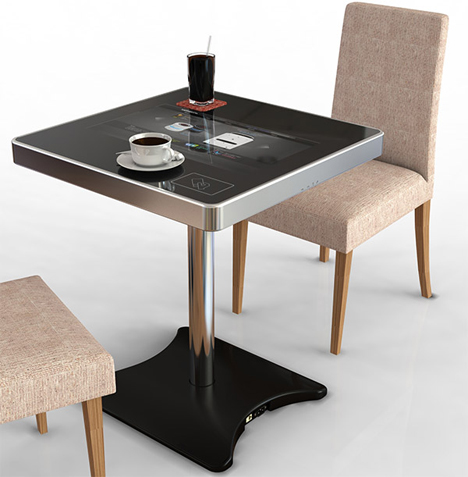 Aside from cell phones and tablets, we've seen touchscreens integrated into voting machines, vending machines and musical devices. Perceptive Pixel's Jeff Han integrated one into an industrial designer's dream set-up and Adam Benton proposed this desk I'd kill for. But if you look at the physical properties of a proper touchscreen--it's a flat surface that we can use for communications, and the "buttons" disappear when we don't need them—perhaps its true killer app is in restaurants.

At least, that's what Korean electronics company Moneual is hoping, with the rumored forthcoming release of their touchscreen cafe table. With a touchscreen integrated into a table, restaurants could do away with paper menus, instead displaying dish descriptions and photos on demand. Diners would never have to flag a waiter down. And with the NFC technology that Moneual will reportedly integrate into the table, you could pay the bill without having to wait for the check. You'd still need a runner to dole out the chow and a busboy to clean up afterwards, but as a former waiter myself, I'd wholeheartedly vote for an object that made the waiter obsolete.

The rumor mill says Moneual will pull the wraps off of the table at this year's CES, where it just so happens Core77 will be. We'll keep you posted if we come across it.