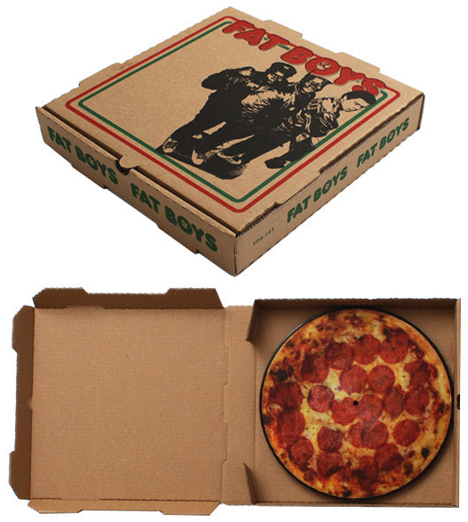 If you have yet to settle on a New Year's Resolution, how about this: Eat more pizza in 2013. I mean, let's face it, everyone loves pizza. (Hell, one of my friends even got a pizza tattoo on her arm... to match her friend's pizza tattoo.) Or maybe I'm craving pizza since Turntable Lab's latest newsletter turned up in my inbox, featuring a brand new deluxe reissue of the Fat Boys self-titled 1984 debut album.Once a sensation of 1980s culture The Fat Boys were early ambassadors of rap music. Buff Love's beatbox set the tone for their hard beats and hilarious lyrics. Their subject matter ran that gamut from over-eating to comic book characters and girls. With their innate sense of humor they rightfully earned the title The Clown Princes of Rap. It's awesome to see The Fat Boys career given its proper due with this more than appropriate pizza box reissue. Includes Pizza Picture disc vinyl housed in its very own Pizza Box, 8-1/2" x 11" 20 page booklet and a download card for bonus material and interviews. Recommended for hip hop heads and avid vinyl collectors.

I've been a fan of pizza for as long as I can remember, but the Fat Boys were a little bit before my time. A history lesson via YouTube:

They sure don't make 'em like they used to.

Jokes aside, I've been interested to see that purchasing new releases on vinyl typically entitles the buyer to an mp3 download of the album so would-be cratediggers can enjoy their record collection on the go. As such, it seems that labels are reviving the longtime industry practice of adding value to physical products through limited-edition packaging. (Conversely, I've also heard that there has been a shift towards making album art more 'scalable,' so it remains legible or at otherwise distinctive at small sizes for display.)