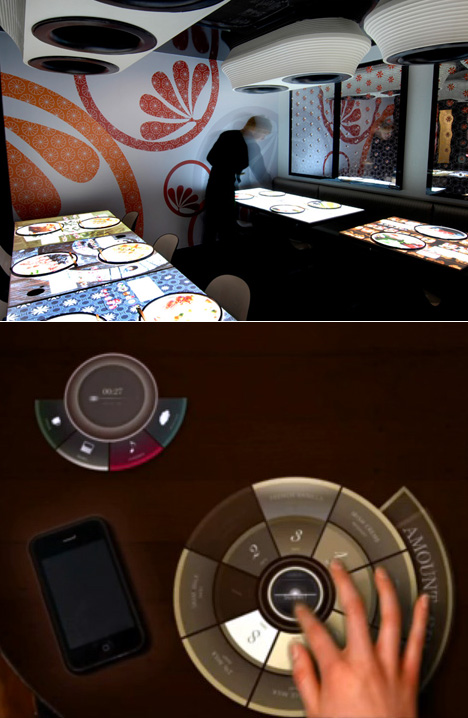 The forthcoming Touchscreen Cafe Table we posted on has had some good follow-up, and unsurprisingly, Moneual aren't the only ones to have visualized such a thing. Fans of the seminal '90s Japanese anime Cowboy Bebop may remember Spike and Jet ordering dishes off of a touchscreen restaurant table that presented holographic images of the dishes, and Core77 readers have chimed in with more examples. SCAD grad and interaction designer Clint Rule (update your Coroflot page please!) worked up a touchscreen cafe table concept video a couple of years ago, and at least one restaurant in London has something similar currently in existence. Whereas I was thinking of the table's potential purely as a transactional device, both Rule and London's Inamo eatery have taken it further.

Inamo, an Asian-fusion restaurant in London's Soho district, opts for projection rather than touchscreen. Their system was created by a London-based company called E-Table Interactive, and though it's projection, it still contains some type of hand-tracking mechanism that provides similar functionality to a touchscreen.Inamo's diners can change each table's desktop image—sorry, "tablecloth"—and in addition to ordering, can even access a live cam of the kitchen area, and projected images of what each dish looks like:

My guess is that the social aspect of Rule's concept would be a bigger hit in cafes, whereas Inamo's features will suit proper restaurants better. And another thing these concepts make me wonder: Would an interactive technology like this enable the Automat to make a return, without needing the infrastructure of the Wall o' Food?