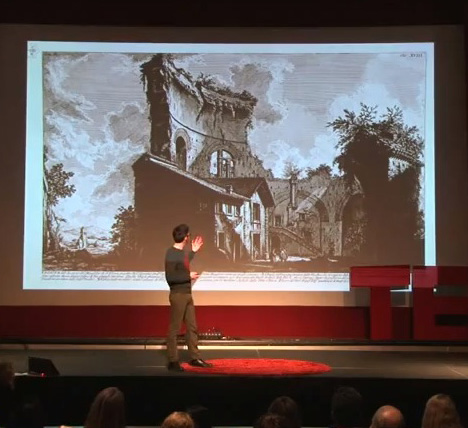 Garth Johnson runs the irreverent ExtremeCraft website, "A compendium of Art masquerading as Craft, Craft masquerading as Art & Craft extending its middle finger." He's also the author of 1000 Ideas for Creative Reuse: Remake, Restyle, Recycle, Renew. And in his TED Talk entitled "Recycling Sucks! The History of Creative Reuse" Garth points out that recycling is the last of the three R's (the first two being "reduce" and "reuse," of course) and ought be done as a last resort only.

To be clear, Garth's not anti-recycling, but we've all seen just how resource-intensive and inefficient recycling can be, in no small part due to human behavior (an unwillingness to pre-separate recycleables, for instance). Despite the sensationalist title, the point of Garth's talk is to show examples of creative reuse throughout world history, going way back to the Romans and coming up to present day.

This is one of your longer TED Talks at nearly 20 minutes, but it's worth sticking with; you're bound to get a chuckle out of some of the re-carved statues in his slideshow, and I guarantee you'll learn a thing or two.