Speaking of reuse, I've mentioned how I do what I'm guessing many of you do, and reuse all of my incoming cardboard boxes by turning them inside-out for re-shipping. Well, the sticky people over at 3M and Scotch apparently want in on this box-reusing action. In the bottom of my last Staples package I found this freebie: 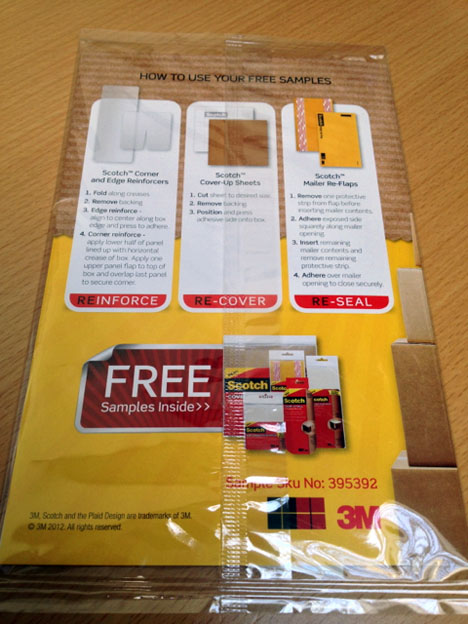 Yep, Scotch/3M now answers "the three R's" with "four R's" of their own: "Reinforce, Re-cover, Remove, Re-seal." Their four new products aimed at getting you to reuse cardboard boxes for shipping are as follows: 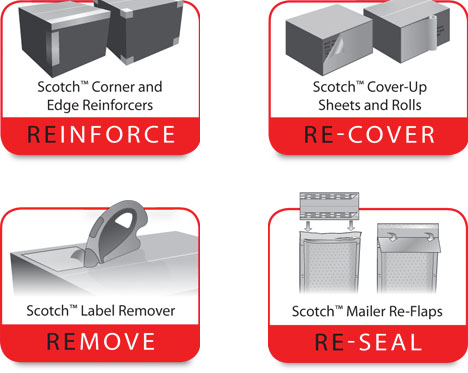 Reinforce: Corner and Edge Reinforcers. The user is meant to place these across a box's centerline and on the corners, to shore up dumpy boxes after they've been through the UPS grinder. It's really just pieces of tape, with the corner reinforcers being a tape square partially bisected by a slit, so you can hit all three dimensions of a corner.

Re-cover: Cardboard-colored, self-adhering paper that you cut to size, then stick over the delivery-system graffiti on your used box.

Remove: A label remover that, as far as I can tell, is some type of shallow-bladed safety knife.

Re-seal: Simple, self-adhering mailer flaps like you find at the FedEx.

My first thought was that these are extraneous, as any ID'er or craftsperson worth their salt already has all of these raw materials or can whip some up. But for high-volume applications, like offices or businesses that need to turn a lot of boxes around quickly, I could see these being useful. And as I wrote in the post on the Globe Guard Reuseable Box, anything that sets people onto reusing before they resort to recycling is probably a good thing.