From the Holy Cow Department: A Self-Propelled Track Saw 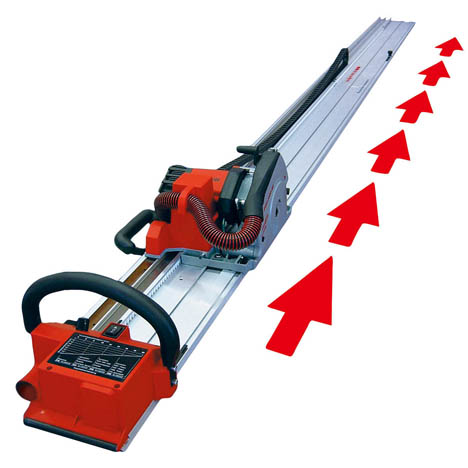 The PSS 3100e from MAFELL is the worlds first self-driven, rail-guided and mobile panel saw. In a single operation, the portable panel saw system handles cutting of lengths of up to 2800 mm (110 1/4 in.) and with the follow-on fence even longer cuts are possible.

"2800mm"—By the way guys, once we get into the thousands with the millimeters, can't we just switch over to meters? It's like saying your baby is 64 months old. Anyways check this crazy thing out:

Pretty sweet that it's got a scoring setting, so you don't have to manually raise and lower the blade each time. I do wonder about the safety of the thing: For example, let's say it's making a 2-meter (sorry, 2000mm) cut, and while it's just 3/4s of the way through, someone bumps into the still-attached waste side of the material behind the blade and closes the kerf. What happens, does the resultant binding and kickback cause the thing to shoot backwards, or does it just shut down?

Still, I love that it comes back to home base after each cut. And Mafell, like Festool, is preoccupied with dust collection: They claim the PS 3100e operates "virtually dust free" when hooked up to a vac, even if you're cutting plasterboard.

I'm scared to ask how much this thing costs, but it's probably moot for us Yanks; looks like Mafell's keeping it Euro-market-only.

From the Holy Cow Department: A Self-Propelled Track Saw