The Internet is abuzz over a photograph of New York's Central Park, for which Sergey Semonov received first prize in the amateur category of the Epson International Photographic Pano Awards. It turns out that he's been honing his craft with group of fellow photo enthusiasts for several years now: AirPano is a noncommercial enterprise that hopes to share the wonders of the world (literally, at times) through the art of high resolution aerial panoramas. The eight team members—who have backgrounds in everything from civil engineering to medical cybernetics—travel the world, shooting major cities, landmarks and other sites of interest, usually from a helicopter (but, as they note, "at times we use light jets, dirigibles, hot air balloons and radio-controlled helicopters").

Right-click to see other views

The AirPano website features "over 700 panoramas showing over 120 amazing locations of all continents including Antarctic and the North Pole"; panoramas from some 50 other locations are in the works. The large-ish files take a while to load—I've only had time to enjoy just a few of them so far—so let's just say it's a good way to kill time if it's a slow day at work. If you're short on bandwidth, you can peruse their gallery of intensely lush stills. The Escher-esque shot below was several years in the making. 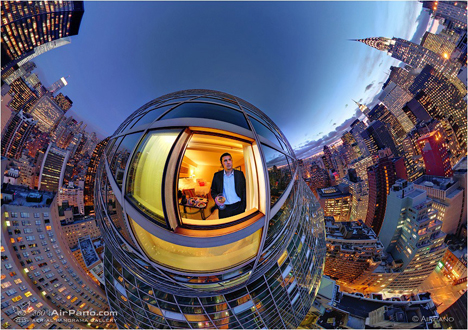 Another pano after the jump—they have sound on autoplay so heads up:

According to the Atlantic, the curious reverse-fisheye visual effect is known as Verdutismo projection. For example, the shadow of the pyramid in the middle of the image below falls to the right, but the shadow of the one on the left falls behind it. 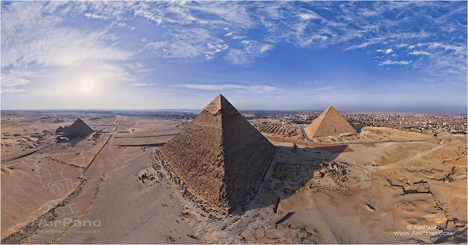 Here's a weirdly mundane 'Making of' clip, shot in Rio (if you're expecting to see a daredevil cameraman suspended from the bottom of a helicopter in a human-sized hamster ball of 5D Mark IIs, you'll be sorely disappointed):

And here's a slightly more interesting clip of team member Andrey Zubetz—one of the crew members who is actually a photographer by training and trade—operating on a lens, removing the hood with a hacksaw:

The latter clip is the first of many clips in their lengthy backstory, a comprehensive and often technical look at the development of their imaging technology. I didn't make it through the whole thing, as it gets pretty heady—they get past the hacksaw and PVC pipe stage in short order, and much of the chronicle is dedicated to the stitching process, among other challenges. 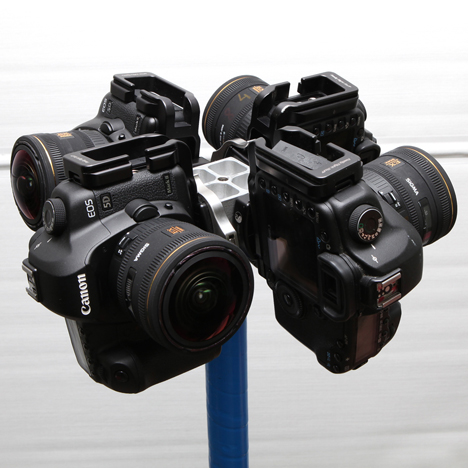