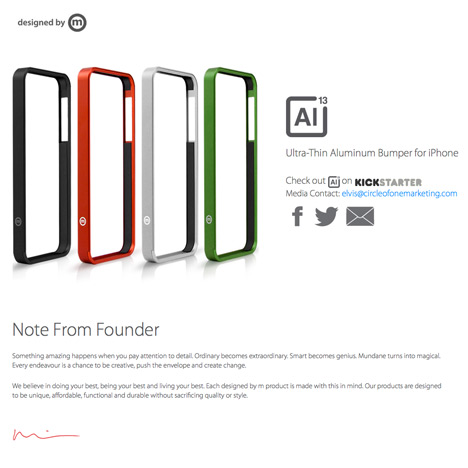 I must admit that the startup Designed by m mostly struck me for its cheeky take on Apple's brand identity, appropriating the design cues (including the font Myriad Pro) with a wink and a nod for their website and, to a lesser extent, Kickstarter campaign. In any case, the AL13 aluminum iPhone bumper is a go, handily doubling its $20,000 goal in a week, and it doesn't take an aerospace engineer to see why: it's sleek, lightweight, easy to install and, above all, thinner than its competitors in the bumper category.

Of course, if the AL13 isn't minimal enough for you, we covered a couple of ultraminimal cases about a month ago. Although Alex Karp didn't reach his funding goal via Kickstarter, the campaign apparently received enough publicity to attract outside investors, who have offered to bankroll Bummpies. mod-3, on the other hand, has surpassed their goal for the Radius case by over 50% as of press time, with five days to go. 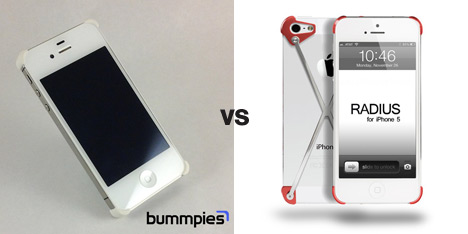 Insofar as we've come a long way from the bulky bumpers of yore, I had all but forgotten about the iPhone 4 antenna debacle of July 2010, when early adopters were dismayed to discover that the sleek new form factor had a fatal flaw, reporting a high incidence of dropped calls. The folks in Cupertino initially blamed the software but the negative PR forced their hand (or death grip, if you will) and they ultimately settled "Antennagate" by issuing free bumpers to iPhone 4 users. (Business analysts note that this was a clever tactic: the free cases were projected to cost Apple about $180m over 12 months, or about 1% of their income, while a recall would have been $1.5 billion, ten times as much.) 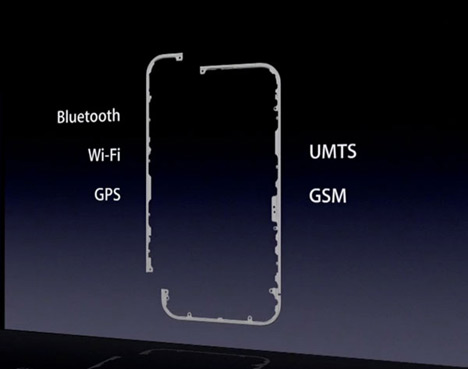 I was also interested to learn a few fun factoids about the antenna/bumper via Cult of Mac: "essentially, if you bridge parts of the antenna band, you change the length of the antenna, which makes it track a different wavelength of radio signal other than the one Apple designed it for." Also, not to deter potential backers, but latest and greatest iPhone is appropriately more robust than its immediate predecessor, as its design accounts for droppage issues, both in terms of reception and physical impact.