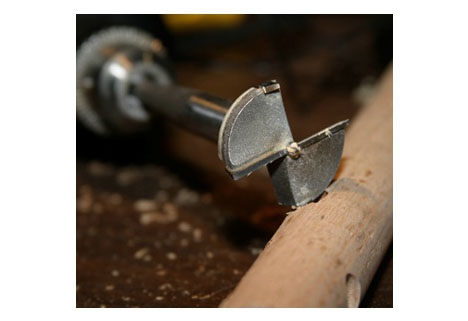 Drilling holes into wood at an angle is a pain in the neck. To avoid deflecting the bit you need to set up some kind of angle jig, which means clamps and more time. Or you can try free-handing it: I had a buddy who could drill pretty decent pocket holes by initially using a too-large bit to make a shallow crater in the surface of the wood, then going into the crater at an angle with a smaller bit, but I was never able to do this consistently well.

A Rhode Island-based company called Bad Dog Tools has developed an innovative drill bit that can start out drilling straight, and then drill at an angle, during the same action. It's called the Rover Bit and it's freaking amazing:

The bit can also chew laterally. So let's say you're installing a door strike—look how quickly you can bang out a mortise:

Lastly, the Rover Bit's blades are designed to cut through different types of material, as you can see in the second half of the vid below:

Check out sizes and prices here.