Portland-based industrial designer Tory Orzeck has careers at both GE Plastics and Nike under his belt. He also founded his own ID firm, Fuse, which has done projects for the likes of Herman Miller and Gerber. But for his latest project, Orp, Orzeck is turning to Kickstarter to create a safety device for cyclists.

In 2007, a young cyclist and art student was killed in Orzeck's home base of Portland. She was in the blind spot of a cement truck, stopped at a red light. As the light turned green and both began to move, the truck made a right turn, towards the cyclist, who was crushed and killed.

That got Orzeck thinking about the problem of bicyclists' relative invisibility on the road, and what he could design to solve that. But thinking outside of the box, he realized increasing visibility was only part of the solution; he ought to incorporate sound—loud, high-decibel sound—to alert a motorist to a cyclist's presence in the event of an emergency. 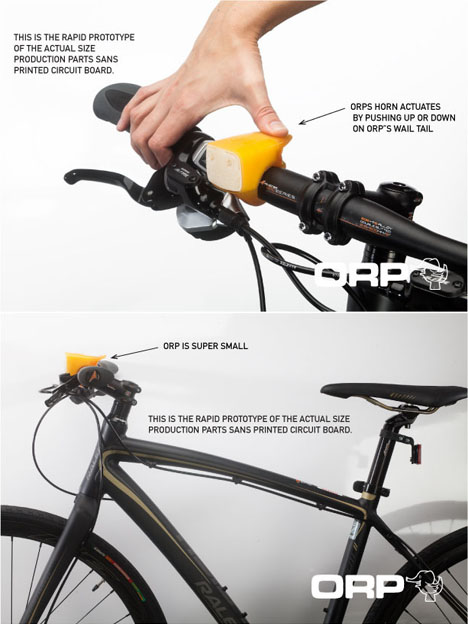 Here's Orzeck himself explaining his resultant design solution, the Orp: