Say Do Svidanya to the Portyanki: Russian Troops to Get Sock Upgrades 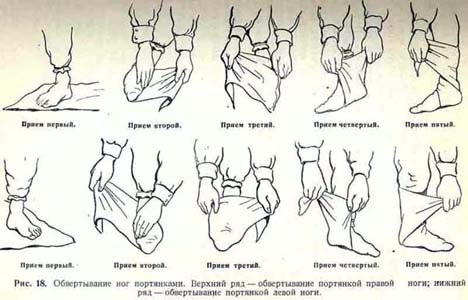 Whether Axis or Allied, there wasn't any army that had it easy during World War II. But I just learned an astonishing fact that hadn't come up in any of my go-to WWII history books: The Red Army did all of their fighting without wearing socks.

Which is not to say they had nothing between their feet and their boots. Russian soldiers were issued portyanki, which are cotton or flannel rectangles of cloth not much larger than a handkerchief. Troops were taught to wrap them around their feet, as seen below, before donning their boots.

If you're wondering why there's color footage of someone doing this, the surprising fact is that portyanki have been a Russian army staple until this year. Although they began phasing them out starting in 2007, it was just this month that Russian Minister of Defense Sergei K. Shoigu issued a call to replace them across the board with proper socks.

The big question is, why did they use these? The answer is manufacturing. While it's well-known that Russian manufacturing might flooded the battlefields, during the second half of the war, with an overwhelming number of T-34 tanks, that industrial largesse did not extend to sock factories. With a finite amount of manpower (womanpower, more than likely) on the home front, and the manufacturing ease of producing cloth rectangles rather than knitted, fitted socks, the decision was made to stick with portyanki.We say "stick with" because portyanki, or "puttee" as they were known to Western armies, were in fact what British, American, Chinese Nationalist, Italian, and French troops were all wearing in the first half of the 20th century. The Brits starting using them in the 1890s, and in fact the name "puttee" is an Anglicization of the Hindi word patti, or bandage. The puttee/patti was more like a boxer's handwraps than a handkerchief, and some Russians were issued these as an alternative. Here's how this latter variant goes on:

via the at war blog

Say Do Svidanya to the Portyanki: Russian Troops to Get Sock Upgrades