A Look at Tactical Tailor, Part 1: The Company's Genesis 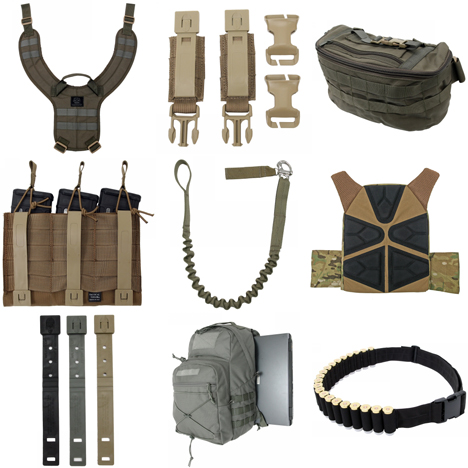 When it comes to designing for the military, there's not a huge distinction between industrial design and apparel design: Gear is gear. Whether it comes out of a sewing machine or an injection molding machine, form follows function, function is everything, and aesthetics don't matter worth a damn. That makes military design appealing to me (independent of the politics of warfighting).

I'd been hearing good things about this design & manufacturing company called Tactical Tailor, based in Washington state. Here's an example of what they design and make, and some of the thinking that goes into it:

In addition to that plate carrier, they produce literally hundreds of tactical products ranging from pouches, bags, holsters, slings, vests, armor, apparel, you name it. The customer base ranges from individuals to law enforcement entities to government orders that come in the tens of thousands.Perhaps what's most impressive is that the company was started by one man in a barracks room. In 1991 Logan Coffey was a freshly-minted high school grad who enlisted in the military. Shortly after completing Basic Training, he found his gear "incredibly uncomfortable and impractical." The creative-minded Coffey bought a cheap sewing machine at Sears and set about modifying his own gear. After wearing the machine out and stepping up to an industrial, Coffey gained a reputation as the go-to guy in the platoon if you wanted to make your gear more comfortable, effective and/or rugged.

Soon Coffey was not just modifying gear, but designing and creating original bags and packs. By the end of his second enlistment he was design and self-manufacturing pro (not to mention an accomplished sewing machine mechanic). Rather than re-up with the Army, in 1998 Coffey started up Tactical Tailor in Washington state, designing gear for military and law enforcement.

The work became Coffey's passion. Some people will start up a small business in their home, but Coffey did it the other way 'round: he started up a small home in his business, renting warehouses where he could work—and building in a sleeping area where he'd spend the night, rather than renting a place to live. Throughout the 2000s, as his business began to grow Coffey moved into subsequently larger warehouses and traveled the country working the tradeshow circuit. He was invited to deliver lectures at military academies and even the Pentagon. Driven by his work ethic and practical design skills, Tactical Tailor was becoming an American success story.

Tragically, Coffey was killed in a car accident in 2008.

The company and Coffey's vision were carried on by his brother, Justin. Next we'll take a look at what they've been up to.

A Look at Tactical Tailor, Part 1: The Company's Genesis