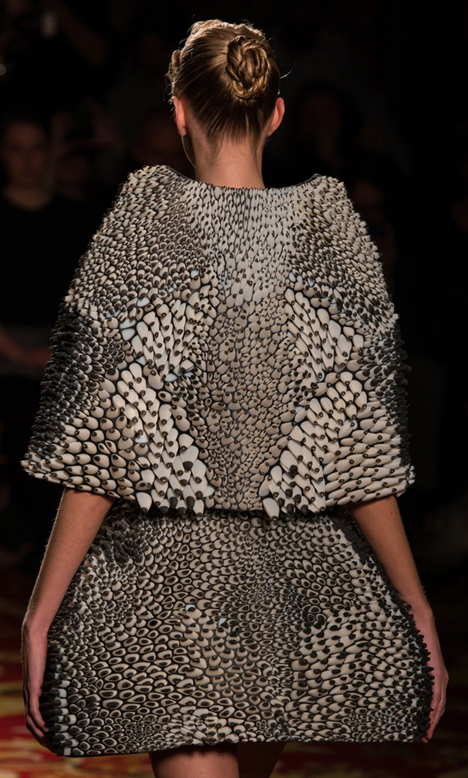 Stratasys, whose Objet printers we checked out here, and fellow digital manufacturing company Materialise have teamed up with fashion designer Iris van Herpen to create some unusual clothes for Paris Fashion Week. Van Herpen's "Voltage" show featured two rapid-prototyped dresses: The first was a cape and skirt created with the help of MIT Media Lab's Neri Oxman and 3D printed by Stratasys. The second, created with the help of Austrian architect Julia Koerner, was laser sintered by Materialise.

The 3D printed skirt and cape were produced using Stratasys' unique Objet Connex multi-material 3D printing technology, which allows a variety of material properties to be printed in a single build. This allowed both hard and soft materials to be incorporated within the design, crucial to the movement and texture of the piece.

"The ability to vary softness and elasticity inspired us to design a "second skin" for the body acting as armor-in-motion; in this way we were able to design not only the garment's form but also its motion," explains Oxman. "The incredible possibilities afforded by these new technologies allowed us to reinterpret the tradition of couture as "tech-couture" where delicate hand-made embroidery and needlework is replaced by code." 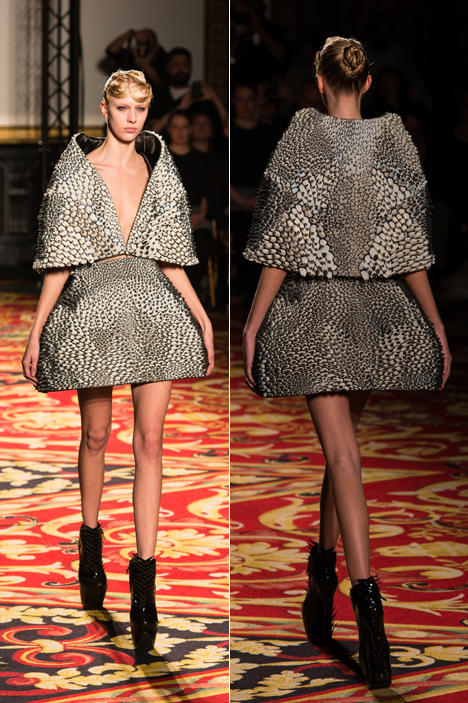 [The Materialise dress is] a flexible, soft dress of stunning complexity. The piece's intricate lace-like texture was created with precision by [selective laser sintering] and would have been impossible to realise any other way.

Julia Koerner explains, "[This dress] reveals a highly complex, parametrically generated, geometrical structure. The architectural structure aims to superimpose multiple layers of thin woven lines which animate the body in an organic way... New possibilities arise such as eliminating seams and cuts where they are usually placed in couture." 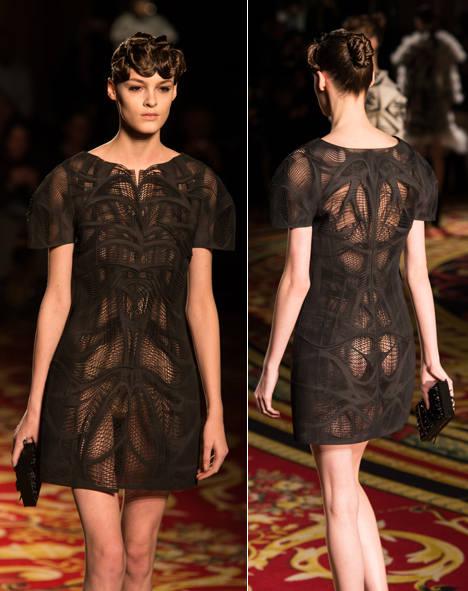 While the designs are conceptual, van Herpen feels digitally manufactured clothes in the future are a certainty. "I believe it will only be a matter of time," she explains, "before we see the clothing we wear today produced with this technology, and it's because it's such a different way of manufacturing, adding layer-by-layer, it will be a great source of inspiration for new ideas."