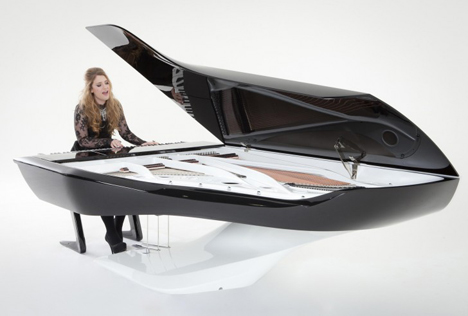 To our British readers: We Americans like stealing your TV shows, like we did with your language, and we use both of those things differently over here. So most of us don't know who Ella Henderson is, since she was only on your version of "The X Factor" before you fools voted her off early.

Anyways this morning, footage of Ms. Henderson was released showing her playing a rather crazy-looking piano that was designed by...the Peugeot Design Lab.

We'd written before that France's PDL was looking to stretch their design muscles, but had no idea they were tackling something this complicated, less than a year out of the gate. (They didn't do it alone, they worked in conjunction with piano maker Pleyel, but still.)

And to our French readers: You guys don't have to worry about us stealing your language, 'cause we can't pronounce those freaking R's.