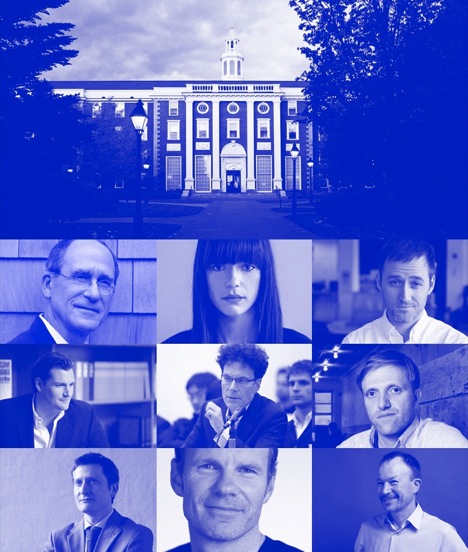 Over the past weekend, Core77 ventured up to Boston to check out the inaugural edition of the HarvardxDesign conference, a collaboration between the students of the Harvard Business School and the Harvard Graduate School of Design. The conference explored ways to use the principles of design to transform business and education and included both a speaker series and a design challenge. We hit the ground running on Friday night with a series of rapid-fire presentations from the likes of Hunter Tura, CEO of Bruce Mau Design; Paul Pugh, VP of Creative for Software Innovation at frog; and Marco Steinberg, Director of Strategic Design at the Finnish Innovation Fund.

Hunter Tura preached how imperative it is for designers and businesspeople to collaborate as early in the product development process as possible in order to create the most holistically successful results. "The Design School students need to introduce themselves to the Business School students," said Tura, "because these people will one day control the fate of your brand." Tura continued with describing how innovation, certainly the buzz word of the conference, has become like irony. "It's very difficult to define, but you know it when you see it," said Tura, while showing examples of products that have changed stagnant markets. Most importantly, though, innovation is not some stand-alone goal to achieve—"innovation is not something that exists in a vacuum"—but rather something that is dependent on the design process.

Paul Pugh talked about bucking the stereotypes in design in order to find happiness. He put up the typical design thinking process, with steps like Discover, Concept, Refine, and Deliver. "These are really marketing diagrams about how design works," said Pugh. "At frog, we try not to stick to that." The very rigid process of design thinking can be limiting, so teams at frog are allowed to come up with their own processes and ways of working, all in the pursuit of turning a sort of happy chaos into the best end results. Pugh described how software design projects are often regarded as trivial, especially in comparison to social innovation projects. "But look at software design as a humanitarian project," said Pugh, flipping the modality on its head. "People sit in front of screens all day—we can make them happier and make their lives better. Always think about how products can change a person's life." 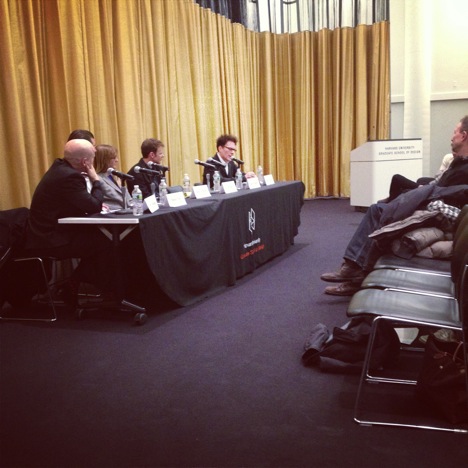 Lastly, Marco Steinberg stole the show with a passionate and down-to-earth talk about using design to face the world's biggest problems. "Our challenges are on such a grand scale. Combine that with diminishing resources and now it's about redesign, not just making the systems more efficient," said Steinberg. He described the aging populace in Finland where the tax base is shrinking, yet the need for services is quickly increasing. This seemingly necessitates the need for service designers, yet solely using service designers as the solution "will only make the services more pleasant—we'll just die more pleasantly," but not solve the root of the problem. Government needs to engage all stakeholders into to administer its services better.

During the panel, Steinberg continued to inspire the audience with his stories of struggling to change the culture of government through embedded designers. "The public sector has no history [of design]," said Steinberg. "If we can figure out how to get in, then we're not burdened by any legacy." However, unlike the oft-repeated design thinking maxim of failing early and often, designers in government cannot be allowed to fail since there won't be another opportunity to try again. Steinberg also offered two "sinister" strategies that he uses to effect change more rapidly: the Trojan horse—"we give you what you want, but load it with what you need"—and creep—"do small things, work at the margins, then take bigger and bigger bites." Although we had never heard of Marco Steinberg before today, he is definitely worth keeping an eye on.

Saturday started off with a somewhat status-quo yet highly enjoyable lecture on using design to shape business strategy from IDEO's Colin Raney, who proffered Richard Buchanan's Orders of Design as a basis for understanding business design. The Orders of Design start with graphic design, then evolve to products, to interaction design, and finally to system design, which includes businesses, government, education and other organizations. "Business is the platform for design," said Rainey. He then described the steps for integrating the design thinking process into business strategy, which include visualizing the system, looking for areas of potential leverage, and then implementing a series of systemic changes to redefine the system. 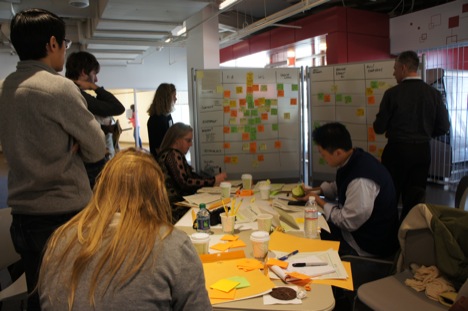 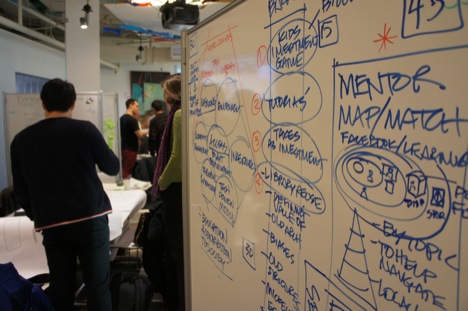 Over at the design challenge, the participants had been tasked with redesigning education and educational concepts. The twelve teams were comprised of both seasoned designers and those entirely new to the world of design, and were headed up by some of the conference's speakers (a very inventive plot twist!). Walking around, it was evident which of the design luminaries were a bit out of practice in leading an ideation session: some teams withered under seemingly dictatorial lectures, while others were animated and alive with the rush of a skunkworks design thinking challenge.

Back in the speaker hall, we heard Gerry Greaney and Molly McMahon from the Mayo Clinic Center for Innovation (check out our exclusive interview with them). Greaney and McMahon described how the internal innovation practice has grown from two employees only a few years ago to well over fifty designers and innovators today. The culture in the Mayo Clinic has also started to shift as doctors and staff are seeing the value in using design research and processes to rethink the delivery of healthcare. McMahon explained the importance of finding opportunities to engage members of the Mayo Clinic community with design whenever possible, including holding open design challenges to bring in new ideas and new champions of the practice. 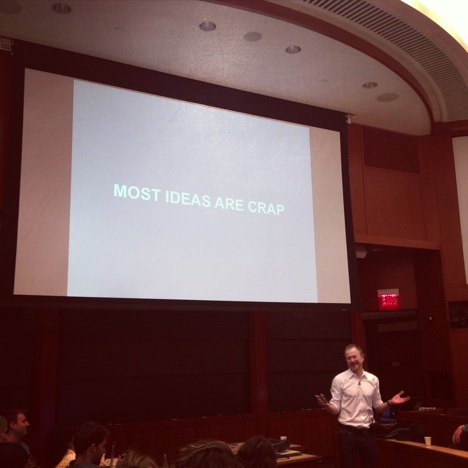 Although we are huge fans of Continuum's work, it was a shame to see Continuum's CEO Harry West give a rather baffling talk that hovered somewhere between candid and pretentious. West started with the goal of determining what design can be considered "good design" and looked back on his early teaching career at MIT. "I would teach that any idea is good," said West, "but then I realized what ideas were being presented and that most ideas are crap." He provided an example of bad design - unreadable elevator button—that quickly devolved into a confusing discourse about designers needing to make money while still making people's lives better. West continued with rules for good design. He was on mark with his first rule that "good design starts with people and ends with people," where he described how Continuum's teams include "different perspectives, different skills, and different ignorances." West's second rule that good design must test well started off strong until he seemed to imply that a product must only be perceived to work well and does not necessarily need to work well (somewhere, a design engineer died). The rest of the presentation sort of fizzled out with a few rules that made "good" design seem kitschy more than anything else. 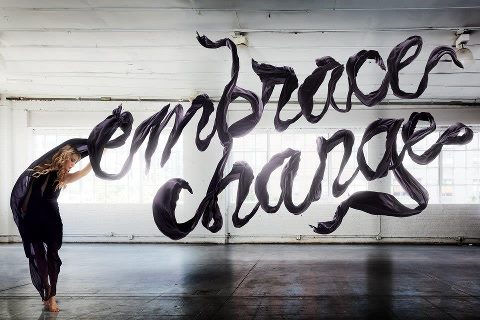 One of Sagmeister and Walsh's amazing typographical ads.

One of the highlights from the day had to be the rising graphic design superstar Jessica Walsh's presentation on play in design. Her Powerpoint was hands down the most well-crafted and perfectly executed deck of slides we have ever seen, including extremely creative videos and animations she created exclusively for the talk! Walsh explored how play was crucial to her development as a child and then budding designer. Now, giving in to play allows her to have fun at work and come up with innovative concepts for projects. Of course, too much freedom can actually make designing more difficult, so Walsh gives herself specific constraints to work within, such as only working in black and white or working with a set number of shapes. Somehow, Walsh takes very simple concepts and flips them on their head, creating standout pieces of design in the process. 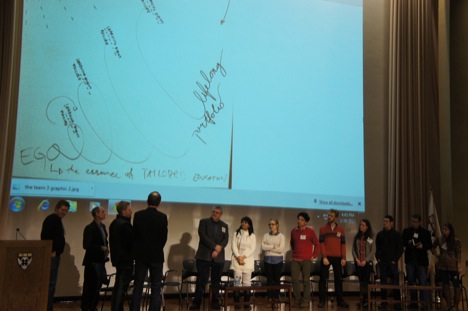 HarvardxDesign came to a close with two teams from the design challenge presenting to a panel that included Harry West, Bruce Nussbaum [who we also interviewed on the occasion], IIT's Patrick Whitney, and Kickstarter's Charlier Adler. The first challenge team described their "portfolio of becoming" that would track data about students' non-academic pursuits. The idea met with little enthusiasm from the panel or the audience. The second team, led by Mayo Clinic's Gerry Greaney, gave a slam-dunk presentation on redefining failure as an "iterative learning process." The panel was initially on-board with that concept that was created in a matter of mere hours until Whitney loudly declared it "one of the worst projects I've ever heard." After that, the panel reversed their compliments and started attacking the fledgling designers. Although Design Challenge Team 3 did not win any prize, let Core77 be the first to declare Team 3 the de facto winners of HarvardxDesign 2013!

A special congrats to Roderick McMullen HBS '14, Jonathan Arena HBS '14, and Miriam Roure GSD '14 for pulling together a fantastic conference.