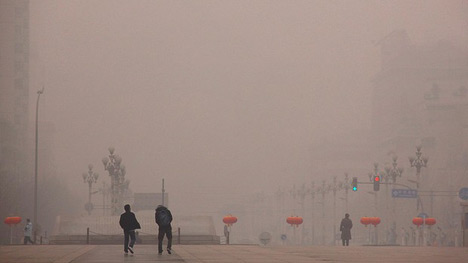 Image by Reuters, via SMH

Cycling has long been regarded as a sustainable alternative to fossil fuel-based modes of transportation, but in rapidly modernizing Chinese cities, the boom in the latter has discouraged the prevalence of the former. Beijing, for one, is notorious for its poor air quality, which typically hovers at the threshold of being a full-fledged public health hazard. Hence, a Chinese millionaire is now hawking canned air at 5RMB (80¢) a pop1 in a highly publicized campaign to raise awareness about the oppressive atmosphere of the capital city (so to speak).2 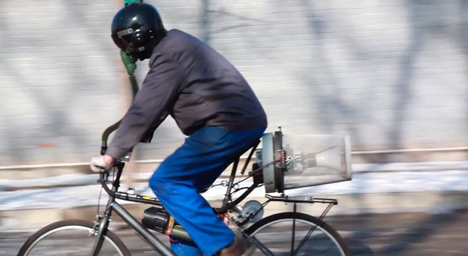 Yet the bicycle remains an inexpensive, efficient and altogether practical option for many of the city's 20 million residents, perhaps now more than ever before, considering that automobiles clog major thoroughfares around the clock (lest we forget the infamous ten-day traffic jam from last August). Beijing-based artist Matt Hope has come up with a clever solution: he's rigged up a homemade 5,000V air filter to his bicycle, and it's pretty rad:

Granted, the "Breathing Bike" is easily beyond the scope of even the most elaborate IKEA hacks we've seen in the past, such as Andreas Bhend's instructional approach and Samuel Bernier's 3D-printed custom parts... to say nothing of your average ad hoc handsaw + power drill kluge. Drawing on his engineering know-how, Hope hooked up a wheel-powered generator to a filtration system that pulls air through a perforated garbage can from the local yijia (as the Swedish megachain is known in Chinese). Filtered air circulates through a hose that's hooked up to a fighter pilot mask, no Dyson digital motor required. (I'd be curious as to how often he cleans out the wastebasket, as well as what it looks like after a particularly carcinogenic commute...) 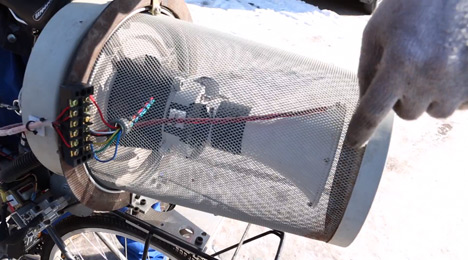 Still, Hope dryly notes that "if you ride this in the rain, you could potentially kill yourself"... which would probably result in a far more spectacular obituary than a slow, painful death of respiratory failure. 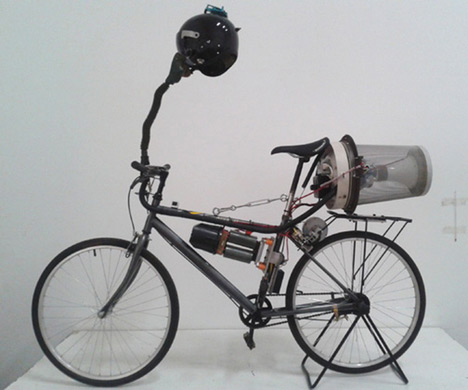