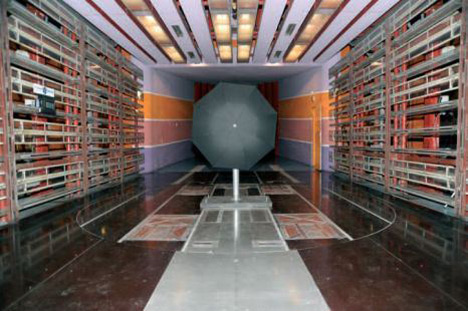 Regarding the previous post, I was curious to see that the four-finger grip design invariably alludes to brass knuckles, whether it's made from aluminum or ABS. But the handle is perhaps less intimidating a quasi-weapon than the business end of the umbrella: even a compact one can be a makeshift bludgeoning implement when the chips are down. Hell, a Charlemagne-quoting Sean Connery even took down a fighter plane with one in his memorable turn as Henry Jones, Sr.... and then there's the legendary "Bulgarian umbrella," which allegedly delivered a lethal dose of ricin to Bulgarian dissident Georgi Markov during the Cold War.

It so happens that I learned of Markov's assassination via Wikipedia, when I was looking up the toxic substance during a Breaking Bad binge (you know how it goes); so too did I discover another interesting umbrella concept via the online encyclopedia of record while researching the Brolly. 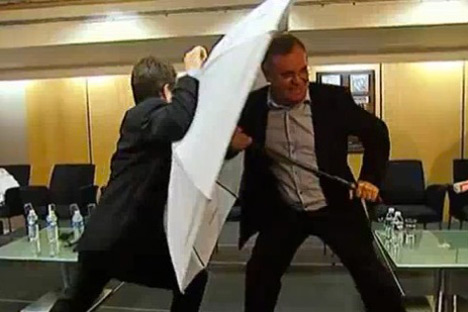 About two years ago, the Daily Mail reported that the security detail of the least popular leader in French history would be equipped with a bespoke kevlar umbrella in case of inclement weather or malcontents. Apparently, former president Nicolas Sarkozy felt so threatened by March 2011 that his bodyguards were packing an an all-but-bulletproof parapluie, known as the "Para Pactum" ('prepare for peace' in Latin). The otherwise unassuming aegis deploys in the same fashion as your $5 Chinatown umbrella but offers protection from "knives, acids, rocks and most other projectiles" in addition to more commonly-encountered nuisances such as water falling from the sky.A source at the elite RAID police unit, which tested the umbrella alongside the Institute of Aeronautical Engineering Institute in Saint-Cyr, said it would prove invaluable to Mr Sarkozy.

"He's had all kinds of missiles aimed at him from above, especially on visits to high-rise housing estates where he's particularly unpopular,' said the source. "This umbrella will keep him pretty safe. It won't stop bullets, but it will reduce their impact considerably."

Unfortunately, my French isn't nearly good enough to follow along with the video above, but I assume it's covers more or less the same thing as the Daily Mail article; a more detailed unembeddable video (in French) is online here. (The only other video I could find was a Chinese news segment about the contraption.)

At about five times the weight of a normal umbrella and £10,000 (about $20K at the time), let's just say it's not for everyone... but it's currently available (in 22 colors) to the general public from French umbrella company Real Cherbourg. According to the product page, it's been tested against a wide variety of assailants: "in wind tunnels; against dogs weighing 55lb (25kg) and hitting it at 21.7 m/h (35 km/h); with a variety of blunt objects thrown at it with full power; and with further tests with other means of pressure: all of these have proved that Parapactum is fulfilling its mission even beyond its yield point." 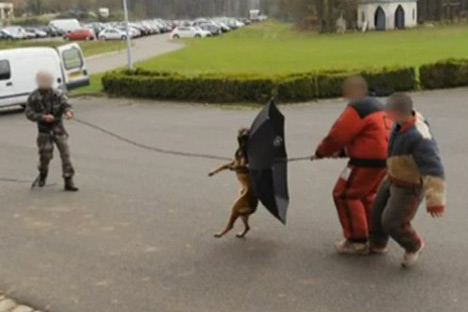 It's a comical product in more than one sense of the word, but besides the obvious reference to a certain Batman villain, I think Captain America's 'Vibranium' shield is also a worthy reference point, considering its paramilitary applications.

The only feature it lacks, from what I can tell, is a small speaker that declares "Prepare for Peace!" every time it's deployed...