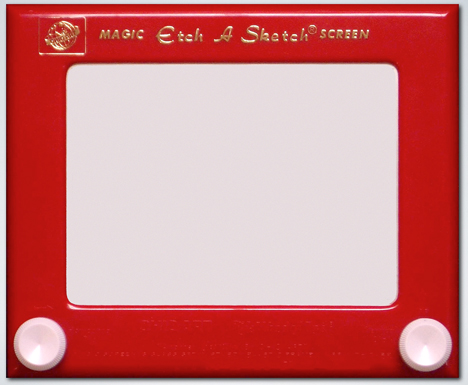 Andre Cassagnes, the man who invented the Etch A Sketch, has passed away.

In the 1950s Cassagnes, a French electrical technician, was installing a light switch at the factory where he worked. The switch plate had a protective decal on it, which Cassagnes removed. That decal attracted bits of metallic powder by-product present in the factory, and Cassagnes noticed that when he made pencil marks on one side of the decal, the powder gave way to the pencil tip and the marks showed up on the other side.

After observing this electrostatically-powered accident, Cassagnes spent several years harnessing this phenomenon into a handheld device. At the 1959 Nuremberg Toy Fair in Germany, he pulled the sheets off of his L'Écran Magique ("Magic Screen.") A transparent plastic sheet was lined with aluminum powder on the inside, and a joystick controlled an internal stylus that could be dragged across the screen, inside the device, to create lines. The "drawing" could be erased by shaking the device up, which redistributed the powder; small plastic particles mixed in with the powder prevented it from clumping up unevenly.

An American company called Ohio Art paid Cassagnes $25,000 for the rights—a princely sum back then—and called him in to work on a revised design. Interestingly enough, the form factor was altered to resembled the hottest home appliance of the day: The TV set. Cassagnes' joystick was replaced by two knobs below the screen, and the entire device was rebranded the "Etch A Sketch Magic Screen."As a child I played with one, and was lucky to pull off something on this level: 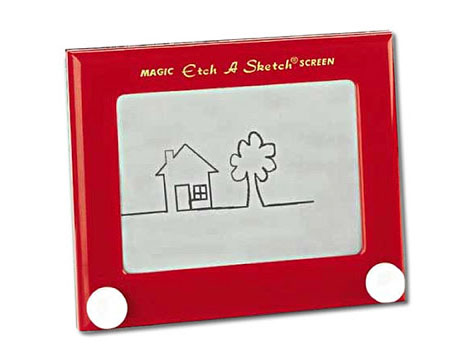 Fine artists like Jeff Gagliardi, however, have used it to create decidedly more refined images.

Today the Etch A Sketch is still manufactured, and it's sold more than 100 million units since its inception.