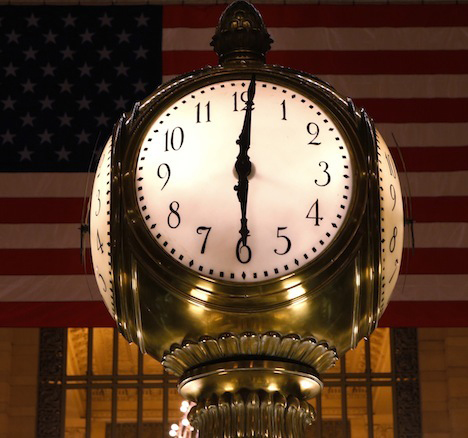 This clock is lying. And that's why you don't have a broken ankle

This clock is lying. And that's why you don't have a broken ankle

It was the advent of railroads and the Industrial Revolution that really pushed the clock into widespread usage. Timekeeping devices had been around for centuries, but with much of the world living in an agrarian society, there wasn't much need to know the precise time; you woke up when the sun rose, worked the fields, and went to bed when it got dark. But once you needed to be at the factory by 9AM, or catch the 11:53 to Chicago, it was better to look at a mechanically-powered circle with indicators than to squint up at the sun and guess.

So we're surprised to see that a particularly famous train station has been gaming their clocks for years, eschewing honest accuracy for the sake of social engineering. It turns out that New York's Grand Central Terminal, more popularly known as Grand Central Station, purposefully sets their clocks to all be one minute fast. Why?

The idea is that passengers rushing to catch trains they're about to miss can actually be dangerous—to themselves, and to each other. So conductors will pull out of the station exactly one minute after their trains' posted departure times. That minute of extra time won't be enough to disconcert passengers too much when they compare it to their own watches or smartphones ... but it is enough, the thinking goes, to buy late-running train-catchers just that liiiiiitle bit of extra time that will make them calm down a bit. Fast clocks make for slower passengers....