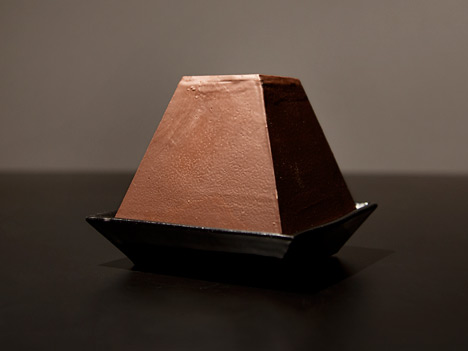 Designer Alexander Lervik is pleased to present Lumière au Chocolate, his latest project in the Lervik 100 collection, which he is presenting at this very moment in his current home of Stockholm, Sweden (the opening is tonight, February 4th, from 6–10PM at Galleri Kleerup). Produced by Scandinavian LED specialists SAAS Instruments, the uncanny chocolate ark belies a latent luminosity:The Poetry of Light chocolate lamp, unlike other lamps, is completely dark when you first turn it on, mimicking light spreading along the horizon at sunrise. The heat from the lamp causes the chocolate to begin melting, and it takes several minutes for the first rays of light to penetrate. Holes soon form and as the light grows the chocolate melts. The material and structure of the lamp are the result of pure curiosity. Alexander Lervik wanted to explore the possibility of creating a contrast to light, i.e. dark. The shape of the lamp has been devised based on extensive testing involving the melting process. 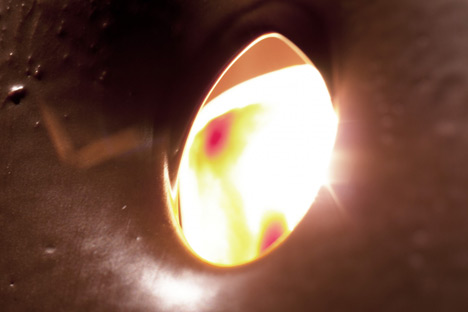 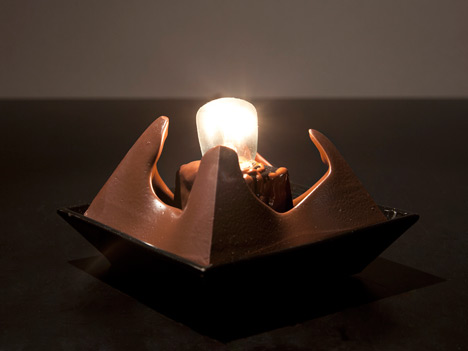 According to Lervik, the form was originally supposed to be a cube "but once we determined how chocolate melts together we modified the shape to resemble a cut-off pyramid." 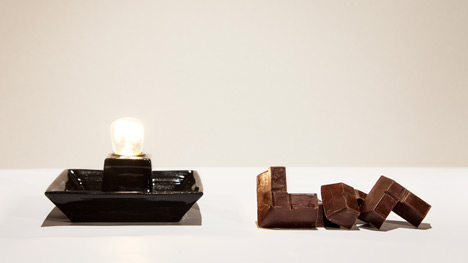 The melted chocolate solidifies into bite-size chunks after 15 minutes or so; no word on whether replacement shades will be available. I can't help but wonder if it would be possible to make a base could be shaped like an inverted frustrum, i.e. a mold of the abat-jour, such that it could be replaced after use... 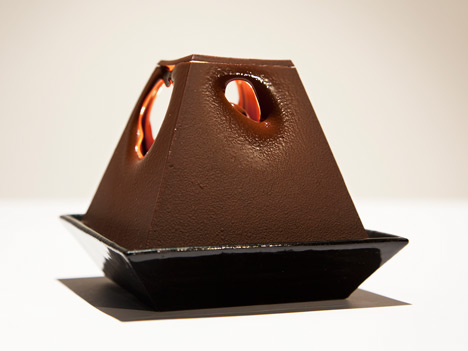 Of course, Lumière au Chocolate inevitably evokes the Slow Glow Lamp, designed by NEXT architects and Aura Luz Melis for Droog: Filled with waxy white vegetable fat, the Slow Glow more explicitly resembles a Florence flask more than an oversized light bulb, but rest assured its incandescent warmth quickly renders its opaque insulation into a translucent amber, like an egg yolk uncooking itself. (If you're curious to see it in action, you can see a user-generated video here, but frankly it's much more awesome IRL.)