Seeing the Forest for the Beach: An Evergreen Post-Sandy Recovery Effort and Its Art World Forerunner 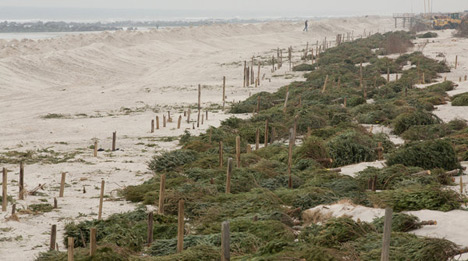 Photo by Ozier Muhammad for The New York Times

Cliché though it may be, it's hard not to describe it as anything less than a gift that keeps on giving: still reeling from the devastation of Superstorm Sandy, a Long Island waterfront community has united to upcycle some 3,000 Christmas trees as an ad hoc solution in the interest of rebuilding protective sand dunes. Several Long Beach residents proposed the solution, which was approved by city officials and implemented by volunteers last weekend. Per the New York Times: Healthy sand dunes are the first line of defense for coastal towns during storms because they keep the ocean from invading backyards and basements. But sand alone is not enough. An anchor, often naturally growing grasses, is needed to prevent the sand from blowing or washing away.

But the grasses cannot grow without a significant accumulation of sand, and in Long Beach these days there simply is not enough. That is where the Christmas trees come in.

"The trees act in place of natural plant growth," said Charlie Peek, a spokesman for the parks service in North Carolina, which has been using Christmas trees to spur dune revival for years. "It gives it a little head start, a little bit of a helping hand. In an ideal situation, the plant growth comes in after it and starts building a natural dune."

The method is not uncommon, particularly in areas like the Carolinas and Florida that are prone to hurricanes. It can take two to three years for dunes to become fully re-established after a major storm.

The commendable community effort is an uncanny echo of an art installation from almost exactly a year ago to date, Klara Lidén's widely acclaimed Pretty Vacant at Reena Spaulings, a second-floor gallery space that happens to be above one of my regular dim sum spots. The main attraction of the solo exhibition, "S.A.D." (after the mood disorder), consisted of a medium-sized room filled with a faux forest of some 80 discarded but otherwise intact Christmas trees. New York Magazine's Jerry Saltz nicely captured the redolent sentiment of the installation. Immediately inside, you're confronted with the startling sight of a space filled with discarded Christmas trees, all scooped up from the sidewalks of New York by Liden and her cohorts. A disruption of the senses comes, thoughts of the Brothers Grimm, the foreboding of forests, inchoate uneasiness. You see only a few feet in front of you. Still, there's space enough between the trees to proceed. Make your own way in, push trees aside, slide through...

Unlike almost all artists who fill a gallery with one thing, be it glass jars, wooden beams, or cotton bales—a trope so worn-out it should be banned—Liden places a leather couch in the center of the room. It churns up everything, getting you to stop, look, listen, smell, and maybe shudder. 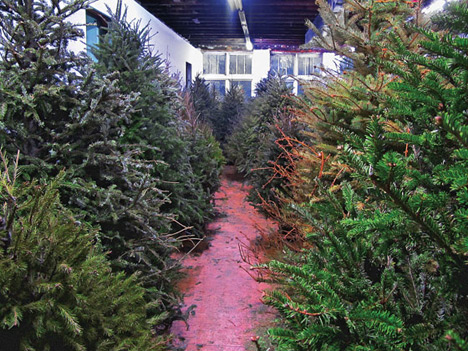 I was similarly moved by Lidén's gesture, which is precisely why I was interested to see the recovery initiative in Long Beach, where the trees—donations from Home Depot alongside the discarded ones—take a radically different meaning than those in the gallery setting. Indeed, the Swedish artist's entire oeuvre brings a variation of another platitude to mind: one man's trash is an artist's reclaimed treasure. Where the Lidén extends the effective lifespan and meaning of the discarded trees for the single month of the exhibition, the upshot of the evergreens on the beach will remain unseen for years. (Here it's worth mentioning that the trees at Reena Spaulings were ultimately recycled into mulch, as are all curbside Christmas trees in New York City.)

So it's not a question of whether art or design is better suited to breathe new life into reusable refuse—it goes without saying that there's more than enough reusable raw material to go around. The trees in Long Beach are several steps removed from, say, salvaged furniture, but their ecological repurposing makes for a striking contrast to Lidén's refurbished forest: the former are meant to be buried for the sake of the dunes, the latter is an emphatic statement about a perennially moribund consumer culture. Each project is artificial in its own way, yet they are equally representative of human endeavor and our ability to not only imagine a better future but to be agents of change.

The Times cites additional uses of Christmas trees for good measure:The afterlives of Christmas trees can be quite dynamic. In southern Louisiana, the trees are woven into fences and used to block dangerous levels of saltwater from flowing into coastal wetlands. They have been used in Illinois to create nesting structures for herons and egrets forced from natural habitats by development.

Seeing the Forest for the Beach: An Evergreen Post-Sandy Recovery Effort and Its Art World Forerunner