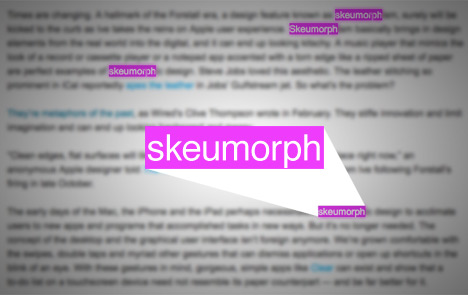 Ok so this is sort of just a pet peeve, but it's relevant enough in this day and age of push-button journalism and SEO to warrant a quick post here: As an editor and former philosophy student, I have an abiding interest in the English language and I generally can't help but notice typos that I invariably encounter in my daily media consumption. Case in point: the commonplace omission of the first "o" in "skeuomorph."

I'll refrain from pointing a finger at the perpetrator of the typographical error—I figure an eagle-eyed copyeditor will eventually spot the mistake and dutifully insert the absent vowels—and I take no issue with the content of the article itself, but this particular instance of the common misspelling happened to inspire a bout of etymological investigation on my part. I knew that the word was derived from the Greek word skeuos, which means 'vessel' or 'implement.' "Skeuomorph" and its related forms are the only instance of the word in English, but the root has biblical significance as well, and based on those definitions it also seems to mean 'instrument' to underscore a direct relationship between form and function.

Origins aside, I would venture to guess that the common misspelling is due to the word's pronunciation: it is typically vocalized as "skew-morphic"—an easy (albeit imprecise) shorthand for its actual definition, at least to the effect that one thing is bent or contorted to resemble another—and even the proper pronunciation, "skew-a-morph," is phonetically equivocal. The heterographic ambiguity is compounded by its highly unconventional spelling: the letter sequence "-euo-" is extremely rare in the English language. In fact, the only other words that I could find with this highly unusual three-vowel sequence were scientific names that started with the prefix eu- (i.e. good).

Corollary: "Skeumorphic" may also seem like the correct spelling precisely because the prefix eu- is understood to mean good, where the sibilant "sk-" somehow cancels—i.e. "x's out"—the meaning of a back-formed quasi-root "eumorph," which would mean 'good or proper form.'

The irony, then, is that the word itself is decidedly not skeuomorphic: its spelling doesn't look like any existing words, that which might inform one's best guess as to its spelling. It's another one of those weird cases of a term that must be committed to memory: a possible mnemonic might be to remember the root as skeuOS, as in a certain highly skeuomorphic Operating System. 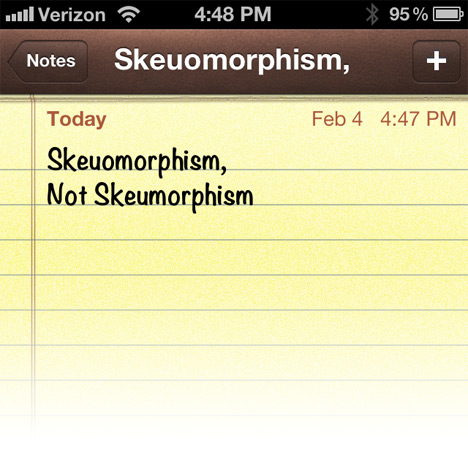 Of course, this admittedly discursive linguistic analysis has little bearing the actual practice of design, skeuomorphic or otherwise: the UI/UX phenomenon is not so much a case of Justice Potter Stewart's oft-repeated notion that "I know it when I see it" but rather "I know it because I see it... all the f'in time."

As our own An Xiao Mina noted in our recent Year in Review series: "While skeuomorphism sometimes has its place, it's often mired in an unnecessary past, rather than open to a expansive future."