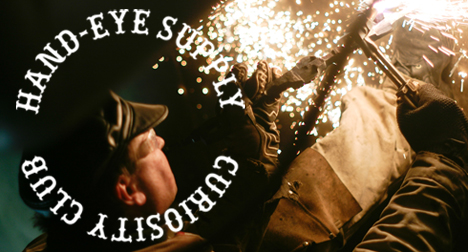 Tonight's talk starts at 6 at the Hand-Eye Supply store in Portland, OR. Come early and check out our space or check in with us online for the live broadcast!

Bridgetown Forge was founded by Arnon Kartmazov after many years of practicing his craft. He served his first apprenticeship with the last working blacksmith in Jerusalem, Israel, in 1985. He then spent 12 years in Japan, where he was apprenticed to a knife-maker, then a sword-maker, and then opened and operated his own shop in the hills of Northern Kyoto, where he specialized in both hand-forged chef's knifes, as well as architectural pieces designed to blend with both traditional and modern Japanese architecture. He also trained with many smiths both in Japan and in other countries, including Uri Hofi of Israel, an internationally renowned master smith.

Arnon Kartmazov's presentation will give a historical background in blacksmithing covering both traditional methods and contemporary applications and processes. Using modeling clay, Arnon will demonstrate the ancient yet still relevant techniques used to create a variety of forms in modern blacksmithing. Arnon will give a general outline of what it means to forge a quality knife, and explain the Japanese approach to creating high-performance, hand-made cutlery. The talk will conclude with a question and answer session, as well as an opportunity for hands-on time with some samples of Arnon's hand-forged pieces.