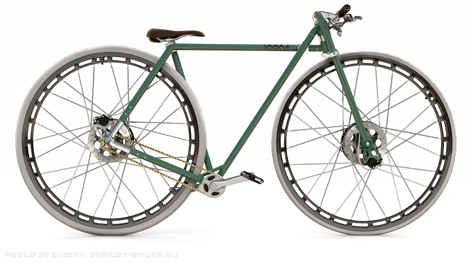 Based on the description of his latest project, it's safe to assume that Paolo de Giusti is sick of all of the newfangled concept bikes that seem to be all the rage these days. Whether they're design competition entries or simply eye-catching renderings, the Italian art director simply isn't impressed. But beyond hoarding vintage Campy components like your average retrogrouch (not that there's anything wrong with that), he proposes yet another variation of the concept bike:It is not a folding bike, nor is it an electric- or battery-powered bike. It is not iOS-ready. You can't plug your music/phone/camera into it. This is the XXXVI DG—quite simply, this is a bicycle. Two wheels. Two pedals. One Seat. Inspired by bicycles for bicycle lovers, combining traditional elements and components in an unconventional yet innovative way. The frame takes its shape from a simple desire for asymmetric aesthetics, while at the same time providing a stable cave-like covering for the wheels and preserving the bicycle's ergonomic features. 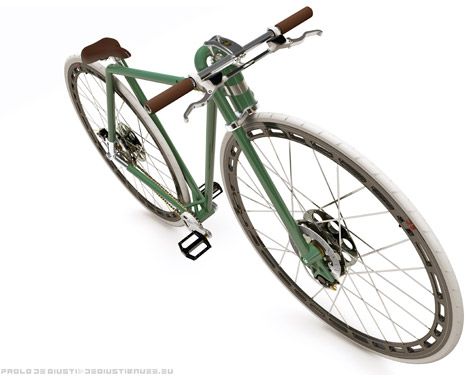 Its name, of course, refers to the diameter of its wheels: "The 36” wheels are, themselves, blasts from the past, having been commonplace many years ago for their uniquely smooth, relaxed and sturdy rolling, perfect for the everyday cruiser." 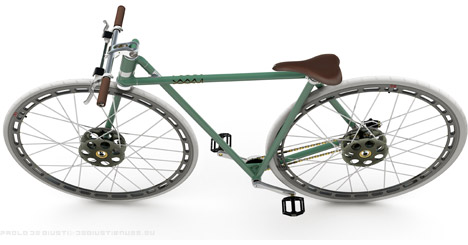 Of course, a particularly jaded cycling enthusiast might cite Cannondale's "Lefty" single-bladed fork and similarly experimental asymmetric frames as precedents to de Giusti's XXXVI DG. But in fairness to the designer, the highly unorthodox bicycle merits consideration beyond its overlapping frame and fork: from the undersized chainring—presumably to compensate for the placement of the single chainstay—to the angled line of the top tube, the XXXVI DG would likely make for an unconventional ride... to say nothing of actually building the thing. 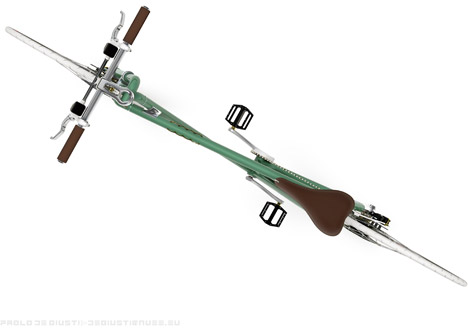 See additional zoomable views over on the Coroflot project page for XXXVI DG.