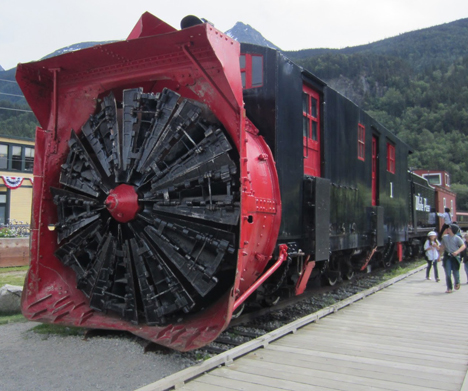 Prompted by the photo above of yet another type of snow-clearing train, this one in Alaska, I wanted to find video of the various types of snowblowing trains in action. Armed with these monster circular blades--it kind of looks like the tunneling machines we looked at last year—a train like this can clear snow in one pass when the level is manageable, i.e. less than half the height of the train:

But once the snow reaches a certain height and/or density, the snowblowing train has to go at it jackhammer-style:

With a stiff wind blowing and powdery snow, you get a better idea of how inefficient this process must be. (No need to watch all ten minutes of this video, a quick scan gives you the idea.)

With the right level and consistency of snow, a snow-clearing train can reach a pretty frightening clip. This looks like a fun gig:

Note that despite that video being labeled "Russian," the crossing sign is in English; one commenter notes that the actual location is western Kansas. But speaking of Russians, they too have cottoned to the idea of using decommissioned jet engines as snow melters. Here's a bunch of former MiG-15 turbines hooked up to trucks (sorry, no video): 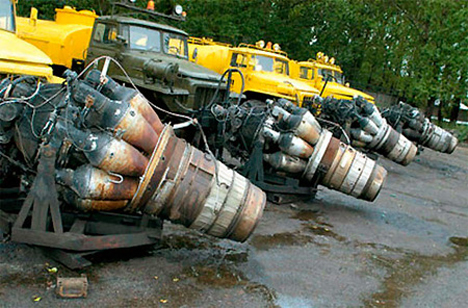 I searched in vain to find compelling video of a jet-powered snowblowing train in action, but there simply aren't many good ones, and unsurprisingly all are shot from a safe remove:

On second thought, this last one is probably more exciting.