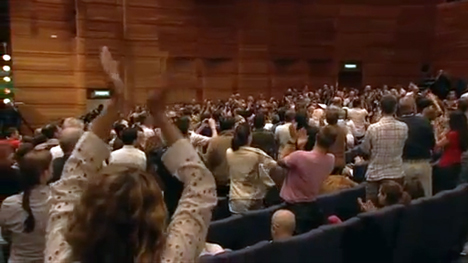 We've all seen our share of TED Talks, and when the camera pans over the audience, most people are paying attention; maybe one or two have their heads down and are presumably texting something. But how do you ensure every pair of eyes in the house is totally riveted on your project? What object, technology or idea could designer Markus Fischer possibly demonstrate such mastery of that the audience is roused into a standing ovation at just three minutes into his talk?

Well, here it is:

While I somehow missed this particular TED Talk the first time around, Fischer delivered it in 2011. He's the Design Director for Festo, a German company that has their hands in a bit of everything—factory automation, bionics, technical consulting—and produced that SmartBird through Fischer's Bionic Learning Network division. It's an astonishing technical achievement of highly-efficient flight, and here it is soaring through a more perilous environment—a warehouse at the Hannover Messe industrial trade show:

In the years since their breakthrough, Festo and Fischer have not announced any commercial application for the SmartBird; they appear to have tackled the challenge for the same reason climbers scale mountains, because they're there.

So: How long before the U.S. military tries to turn one of these into a camouflaged surveillance drone?