The Case for Automated Driving 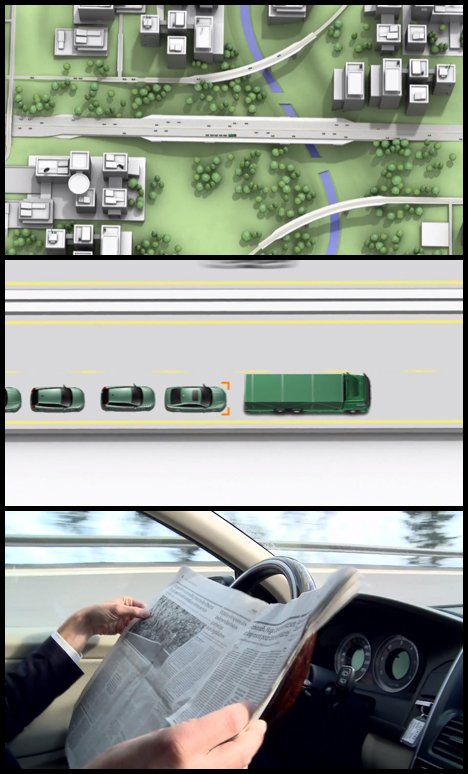 Sartre's maxim that "Hell is other people" never becomes more obvious than when you drive through Manhattan. The cabdrivers are more interested in the conversations they're having on their Bluetooth headphones than on driving. Other drivers are texting when the light turns green. Delivery truck drivers stop to say theoretically flattering things to women who have the audacity to walk past wearing a skirt. Drivers with Jersey plates do this absurd thing where when stopped, they leave at least a car-length-and-a-half between them and the car in front of them, which results in box-blocking behind them. Then there are the spraypainted-white bicycles everywhere, left as memorials that a cyclist was killed by a car at that particular spot.

Something I have wanted for years is for this city, or hell any city, to incorporate automated driving. I know the technology exists. Ten years ago they talked about it for highways and they called the concept "platooning." Here's how it would work in the city:

You don't touch the wheel, or the gas, brakes and horn, at all. You don't control the car. Because you're an idiot. And your time would be better spent letting your Facebook friends know what you ate for lunch. Also, computers are smart. So the city is covered in sensors and transmitters, as is your car, and the cars of all the idiots around you. All of the cars know where all of the pedestrians, animals, other vehicles, and cyclists are at all times.

So the car drives itself. There's not as much sudden stopping-and-starting, because the computer knows how to flow and route a bunch of random bits around smoothly, providing something like flow. Boxes never get blocked. Pedestrians and cyclists never get hit. If the cyclist is in the left lane and needs to make a right turn, he hits a transmitter on his bike, and the cars around him make way because guess what, cyclists have the right of way since they're not filling the air with carbon monoxide and because they rarely kill motorists or pedestrians. And furthermore, if you're in a car at a red light with no crossing traffic or people, then there is no red light, your car moves because it can. So you don't sit there for 30 seconds filling the air with more unnecessary carbon monoxide.

The technology exists. But yes, I know, there will be no uptake in New York City anytime in the near future, because we are not smart enough to work out the kinks and convince idiots that this is the way to go.

Sigh.In the meantime, Volvo is working on platooning, or as they call it, "Wireless road trains." It's not meant for cities, but for highway jaunts. And they've got a novel take on it: Cars in this road train would not be driven solely by a computer, but would instead be programmed to follow a professional—a long-haul truck driver. Check it out:

The name of Volvo's system? SARTRE. They might claim it's an acronym for SAfe Road TRains for the Environment, but we know the real reason they picked it.

The Case for Automated Driving