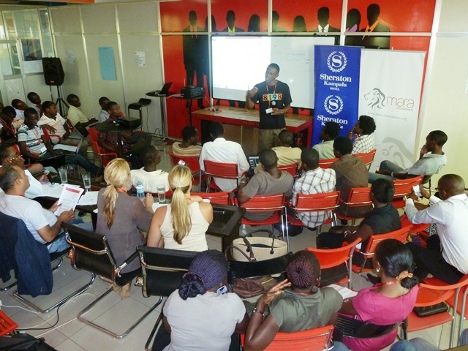 It's a busy, buzzing weekend at Mara LaunchPad. Nigel Ball, the director of Mara, is circulating amongst the crowd, as are a half dozen mentors, including myself. It's a scene that would be familiar to any tech observer in New York or San Francisco... but this isn't either city. In fact, it's not even in North America: The first weekend-long Mara Business Hackathon has just begun in Kampala, Uganda.

Mara LaunchPad, operating under the social business Mara Foundation, is one of Kampala's premiere business incubators. Along with other tech-oriented spaces like Hive Colab and the Outbox Hub, Mara offers office space, mentorship and even venture capital to new startups in Uganda. Many of these businesses often focus on new technologies. 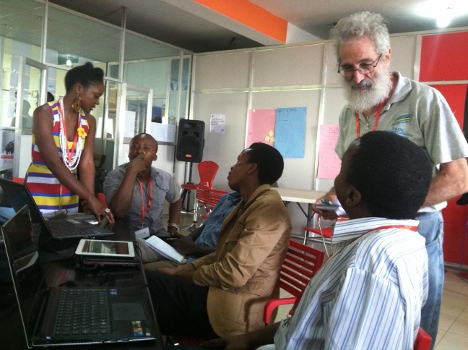 Mentors Evelyn Namara and Daniel Stern advise during the busy hackathon. Image by the author.

What made this hackathon different from many of the popular tech events in Kampala was its focus on building a business. Yes, a prototype and good design were key, but what was more important was that teams developed a solid business model and financials—not an easy feat at all, given the dire need for reliable data in the country.

"In 48 hours our idea matured in away that would [normally] have taken us weeks or months," noted Ivan Mworozi. "The access to experts from various fields was invaluable." Indeed, Mworozi cited the mentorship as key. He delivered the hackathon's winning pitch for E-ride, a new service he and four others will be developing to facilitate transportation in the traffic-clogged city.

Observing that an informal system of car sharing already exists, they wanted to streamline that method using mobile technologies: "Lot of cars and trucks were moving around practically empty because they had no way of know[ing] that we were looking for them."

Second place for the hackathon went to MyProperty, a new service being built by Daniel Olel and team. Just as E-Ride addressed an existing problem and practice and streamlined it, MyProperty aims to connect buyers and sellers of properties around Uganda. As Olel, noted, many middle class Ugandans rely on brokers. Anyone looking for an apartment in New York knows how pricey middlemen can be, and Olel's goal is to use MyProperty to cut out the middleman and build trust among buyers and sellers (quite similar to RentHackr, which I reviewed last year). 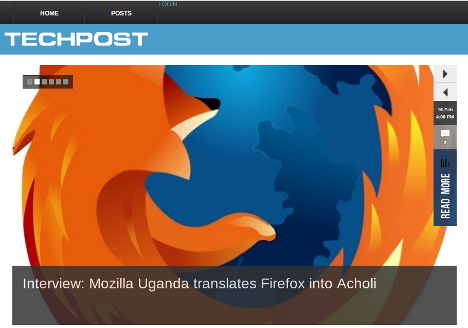 And third place went to Tech Post, a startup near and dear to my heart if only because they're a blogging community focused on new technologies from Uganda or new technologies and how they apply to Uganda. Of all of the new businesses, they had the most developed prototype, with an existing site with tons of interesting content already in the mix.

What distinguished Mara's hackathon from most hackathons I've attended in any city was its emphasis on mentorship. Mentors came in and out throughout the event to answer participants' questions and help them formulate solid business plans and product pitches.

As Nigel Ball, who just stepped down as Mara's director (handing the reins to Delia Dean), noted in an interview with Core77, this is a deliberate and key part of their strategy: "Mara Launchpad is a great community space but there is more needed that just building community. This is why at Mara Foundation we are also focusing a lot on the entrepreneurs themselves, through our mentorship programme, and also providing financing through the Mara Launch Fund. "

The hackathon is an exciting new step for Mara, and they'll be hosting an event like this every six months to nurture new Ugandan talent. Time will ultimately tell if this Silicon Valley-inspired model can translate in the emerging "Silicon Savannah" of East Africa (Silicon Valley itself took time to develop as well). After living here for a few months now, I've been floored by the creative and technical energy in Kampala. It's exciting to see new infrastructure and systems coming into place to support that talent.