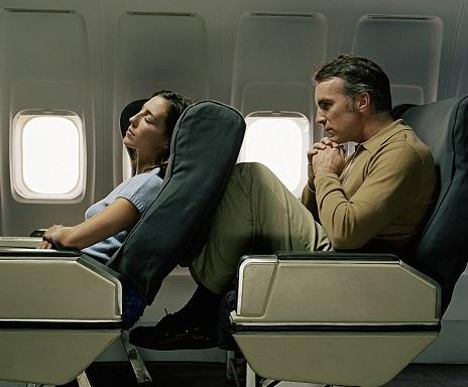 On my last flight out of JFK, I was in the final boarding group to be called. I observed the bulk of the passengers boarding before me all hewing to the current luggage trend: A roll-on bag topped with a little "buddy" bag that slides over the retractable handles.

Boarding the plane, the overhead bins were all filled, not only with roll-ons, but the "buddy" bags as well—along with people's coats. Person after person put both of their bags in the overhead in order to provide themselves with legroom by not having anything beneath the seat. As you can guess, a handful of us in the final boarding group thus had to check our carry-on luggage.

I can't speak for other countries, but in America the in-flight experience perfectly mirrors how we behave in public: We try to selfishly maximize our own comfort to the inconvenience of others. This is how we drive, this is how we ride the subway, this is how we behave in movie theaters, and even how we walk—I've been behind people who stepped off a moving escalator or through a revolving door and simply stopped to look around, heedless of the people trying to exit behind them.

Here's an example of this me-first approach embodied in a physical product design, one that's ten years old: 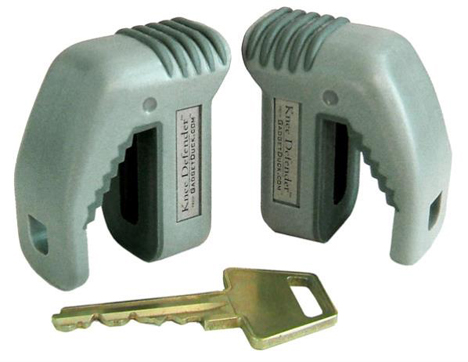 The Knee Defender is a pair of plastic gewgaws that you bring onto an airplane and slide onto the arms of your tray table, for the express purpose of preventing the person in front of you from reclining their seat. 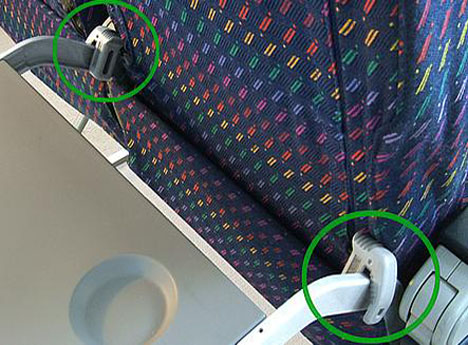 I can't decide if this is good design combatting bad design, bad design versus good design or two bad designs that taste horrible together.Decades ago some prototypical industrial designer, probably one of the Loewys or Teagues of the world, worked out how an airplane seat could recline, to increase that passenger's comfort. This was good design, as back then the airlines presumably provided enough room between seats that this wasn't an issue for the passenger behind. But over the decades the airlines have pressed the seats closer and closer, while we've gotten larger and larger, thus rendering the good design bad.

It's a sign of the times: The system creating this problem has become so complex that culpability is impossible to assign, and thus the problem cannot be addressed head-on. Who is to blame for the "need" for a Knee Defender: The passenger who wants to recline? The passenger behind, who wants more room? The airline shareholders for demanding returns? The airplane's individual interior designers, or the bosses they must answer to? Our reliance on fossil fuel and the attendant difficulty of turning a profit using an airplane full of well-spaced seats?

There are many situations in life where I feel industrial design can attenuate human inconvenience, but I don't feel this should be one of them.

The Knee Defender, by the way, recommends that you print out the following text and hand it to the passenger in front of you: 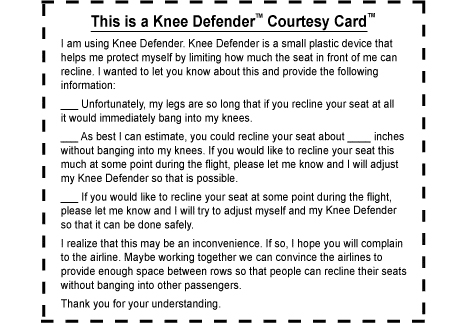 Dying to hear your thoughts on this one.

Update: The plot thickens—in August 2014, a plane was grounded due to an altercation regarding the Knee Defender.