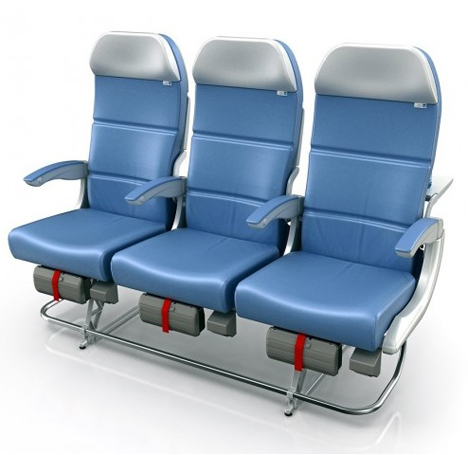 Our post on the Knee Defender, a pair of passive-aggressive plastic doohickeys that prevent the person in front of you from reclining their seat on an airplane, has generated quite a bit of interesting commentary. Aside from one commenter who angrily fulfills the selfish "My comfort is all that matters" ethos—I won't call him out by name, but a casual perusal of the comments ought make it obvious—readers contributed some interesting opinions, well-reasoned and intelligent debate on whether being short or tall is ergonomically worse, and helpful tidbits of information on other design solutions to the problem of airplane seating.

In particular I'd like to hear more and/or see images from Core77 reader and industrial designer Shaun, who devised an interesting-sounding "checkerboard" pattern of economy seating for an airline client. Sadly, Shaun's design was forcibly modified by the outside forces we know all too well, and the mangled version of his concept that made it to the prototype stage was eighty-sixed by unhappy test subjects. (Shaun, every designer on here feels your pain; and if you're both willing and legally able to share more on the project, please drop us a line.)

One of the more interesting tidbits came from reader Kenny, who sent us a link about an ANA-branded Dreamliner that had been kitted out with forward-reclining seats. With this design, the topmost part of your seatback stays fixed in place, but you can slide the seat bottom forwards, pulling the bottom of the seatback into an angle. As you do this, of course, the seat in front of you doesn't move—so moving yourself into a reclined position affects only your own comfort. 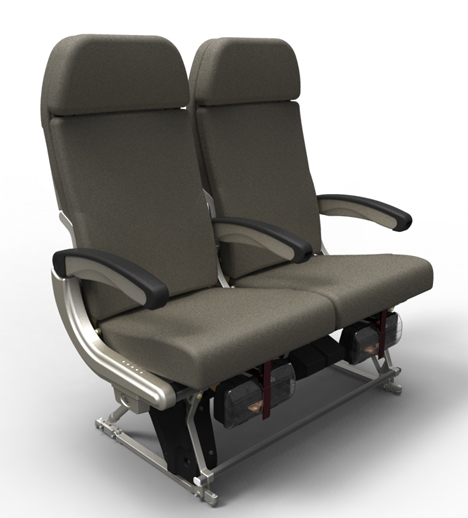 That's still not an ideal solution—what we all really want is just more space—but under the constraints, I think it's a brilliant design approach in that it goes the other way. A passenger's misery at least becomes self-contained; they do not inconvenience others and can instead direct their displeasure at the airline responsible for the space constraints, not their fellow passengers. (Commenters in online forums who have actually tried these seats, by the way, are divided; while no one loves them, some are fine with them while the most vociferous hate them.)

The only video I could locate of this system in action is here. (I won't embed it because the footage is so terrible.) It took me a while to track down the manufacturer and their documentation is incredibly lousy—there's no images, diagrams, or renderings of the seat action—but it appears ANA got the seats from Sicma Aerospace, a subsidiary of French manufacturer Zodiac Aerospace. And though I've yet to see these seats in my last six flights over the past two months, apparently some American carriers have them; Delta, American and United have reportedly installed them in their newer planes, purchased through another Zodiac subsidiary, the Texas-based Weber Aircraft. The seats are called the 5751 and if you don't believe me about the lousy documentation, have a look, here and here. 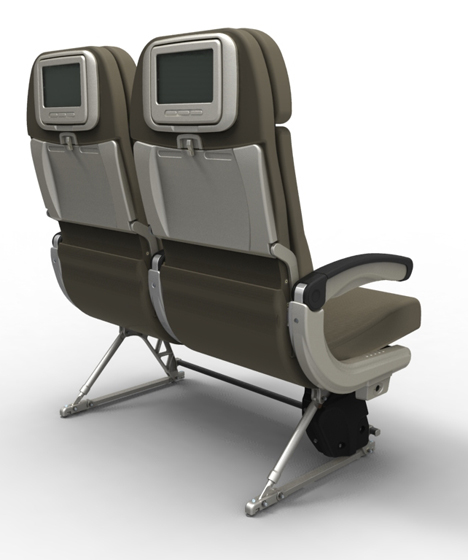 I realize the 5751 seats won't improve the lot of previous-post-commenter Mike, an industrial designer who rings in at 6’10”. And Mike, I've gotta say your comments have turned me around on the tall-vs.-short ergonomic nightmare thing. As a 5’5” person, foreign films in public cinemas is a no-go for me—if the theater doesn't have stadium seating, I can't read the subtitles through the sea of heads—concerts are a depressing study in other people's backs, and recently a cute salesgirl cheerfully told me I might be able to find the size I needed "over in the boy's section." But after reading your comments, I agree that you've probably got it worse; whereas my discomfort is episodic and fleeting, you writing in about having to tough it out in cars, beds, planes and even doors makes me think your life must be a living hell! Anyways if you're ever in the neighborhood, stop by; there are some books on the top shelf I need to get to.