Over the course of three posts, we will take a look at the highlights of the second edition of the Munich Creative Business Week (MCBW), which happened from February 16–24, 2013. 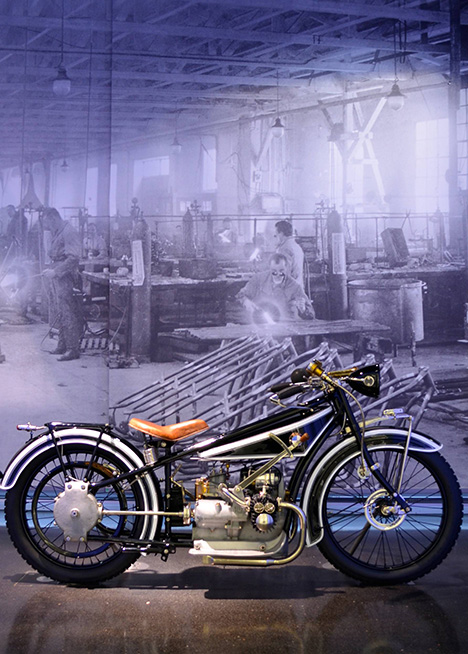 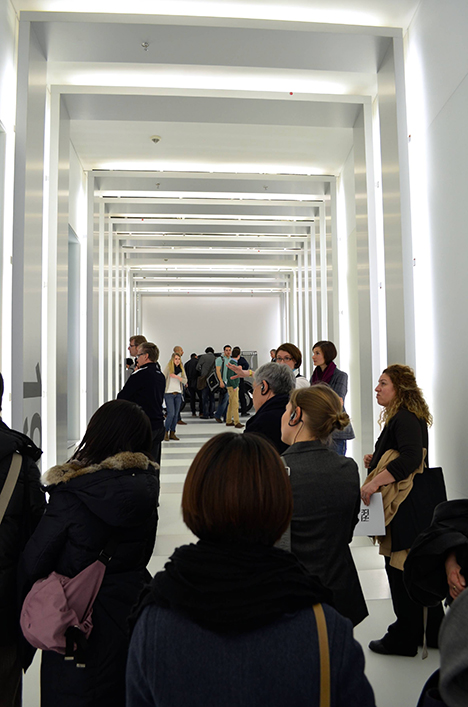 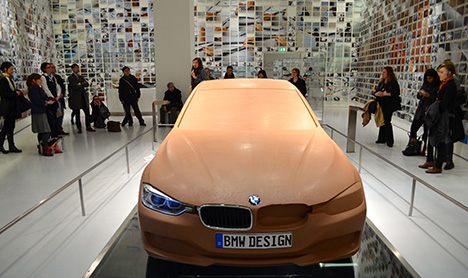 Our time in Munich kicked off with a guided tour through the BMW museum, led by designer Antonia Cecchetti, who passionately explained how the brand started making motorcycles and engines in 1917 and expanded throughout the years without loosing its identity. The first motorcycles used to be available in only in black with white stripes, followed by a color alternative of "white with black stripes." Today, the brand (and its colors) have expanded enormously without compromising its signature design elements, such as the iconic round headlights and kidney-shaped air intakes. We were lucky to have Antonia guide us, being a great BMW fan. We enjoyed it when she told us how the new BMW7 tail lights makes her heart beat faster.

One of the highlights at the museum is the kinetic sculpture, which was used in an advertisement for the BMW 5 series: 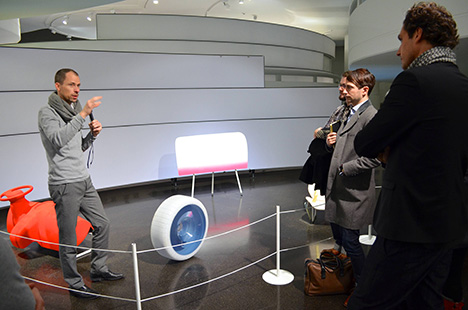 Passing through a history of cars and motorcycles, we arrive at what we might call the future of BMW, or better, BMW MINI which is one of the most iconic cars originated in 1959. The Dane Anders Warming (Head of MINI Design) and Dutch Stefan Scholten (from Scholten & Baijings) offered insights into their BMW MINI One adventure, which was more than just another concept car. Stefan explained how they were invited by BMW for a carte blanche "to do something" and delivering it within six months. 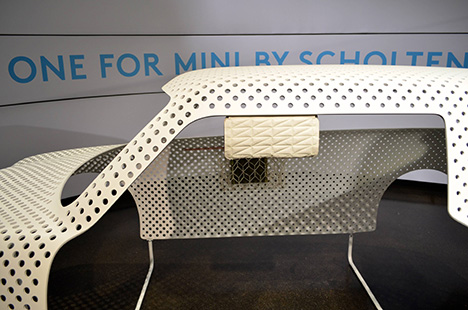 The Dutch design duo first questioned how much of a car a "concept car" should be. We wondered how they could keep an overview of the endless parts by disassembling a complete MINI—well, they didn't. To manage the process within six months they decided to focus on a few parts including its wheels, body, doors, seats dashboard and last but not least, the steering wheel. The steering wheel was one of the hot items to be discussed since the design duo proposed a single spoke wheel—while Anders (a real rally fan) insisted on preserving the brand-specific two spokes. See the final result of this discussion in this video. The fact that even the exhibition poles were designed by the design duo demonstrates their holistic approach combined with an eye for detail. According to Stefan, Carole even noticed that one of the 12,500 (!) holes perforating its skin was actually missing. 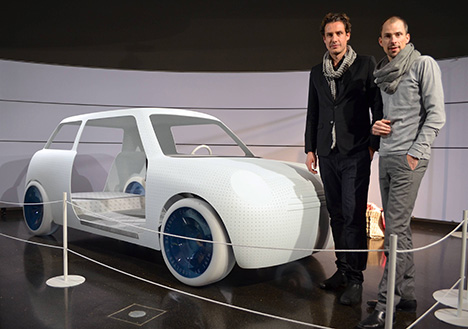 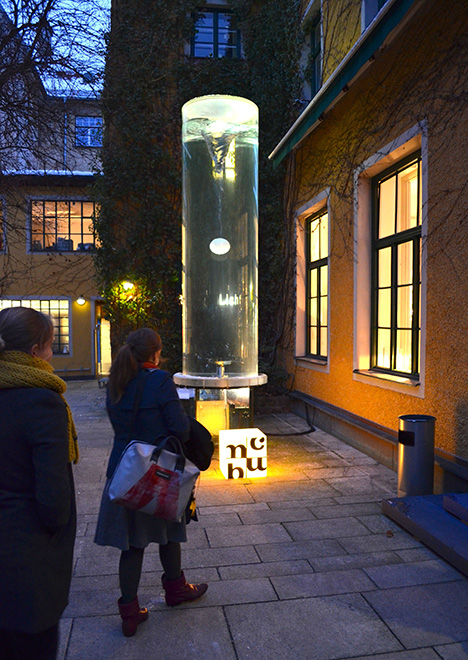 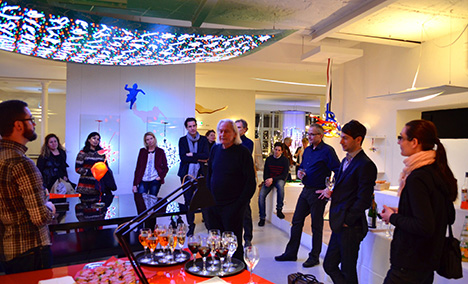 Next, we had the chance to visit Ingo Maurer, who is quite a character: At 81 years old, he says with a smile that he still doesn't know how to spell the word retirement. At his "studioshowroomwerkstattatelier + shop," he brings together a wide range of lights and light sculptures he has developed during his career. Although he and his team are working with the latest lighting technologies, one of the latest developments is the "My New Flame" candle, which features tiny 128 LEDs that form an animated a pixelated candle flame on each side. You can see the idea by Moritz Waldemeyer here at Vimeo. 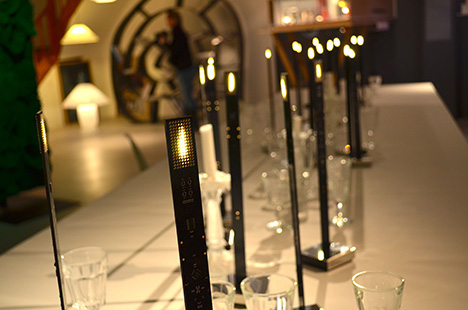 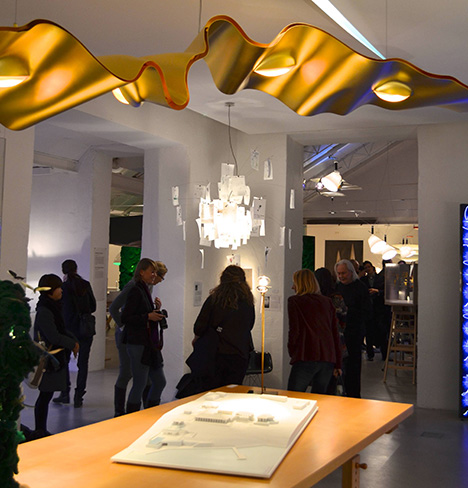 While Ingo Maurer himself has the name recognition, he repeatedly credits the importance of this team of some 70 persons, making clear that his company is anything but a one man show. Besides being a shop for lights, the showroom also features a lot of models, which the company typically makes during the design process. Unlike 3D renderings of spaces, Ingo Maurer and his team prefer to make physical mockups and installations that make a pretty good impression of the play of light and space. What is also surprising is that all lights are "Made in Germany" to control the quality of the exclusive lights. Ingo Maurer smiles again when a Finnish guest tells him that he is one of her youth heroes by following his own path and doing things his own way. 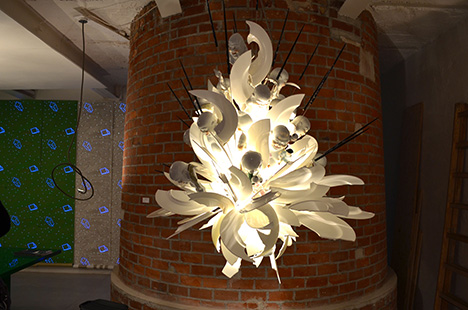 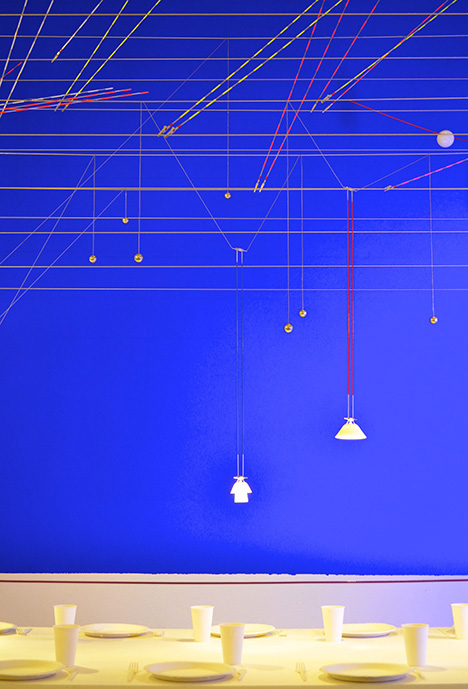 Stay tuned for more news about Cassina's Secrets and the iF Design Awards tomorrow!