Over the course of three posts, we take a look at the highlights of the second edition of the Munich Creative Business Week (MCBW), which took place from February 16–24, 2013. 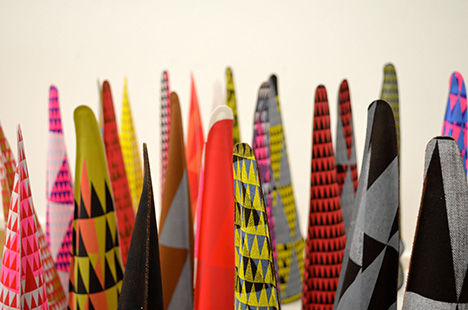 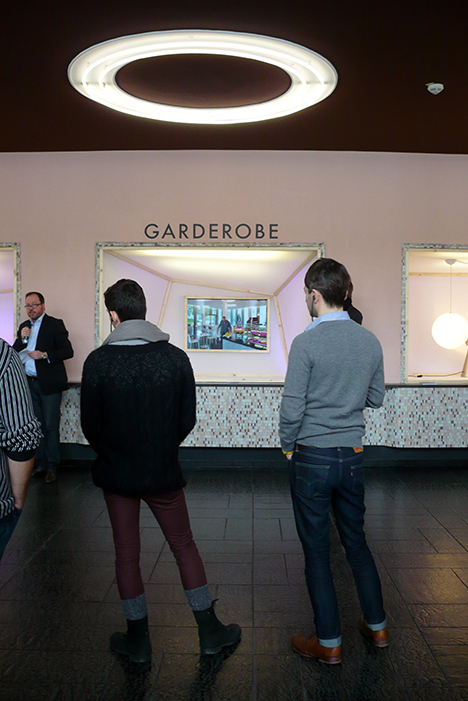 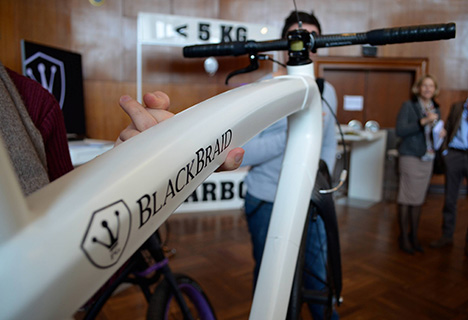 Lifting the "Blackbraid" bicycle with a single finger

At the Alte Kongresshalle, we found a collection of exhibitions and company presentations. One of the highlights was meeting the lightest bicycle in the world. Manuel Ostner from PG explained how they developed a new procedure to produce braided carbon frames with Munich Composites resulting in the "Blackbraid" bicycle that weighs less than 5 kg, all (hand)made in Germany. [Ed. Note: Designer Jacob Haim also used this manufacturing process, as seen in our exclusive look at the RaceBraid bicycle from last November.] 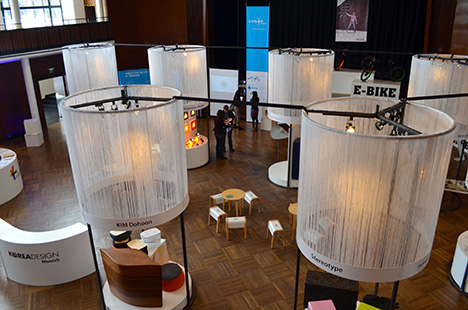 Central exhibition at the Alte Kongresshalle 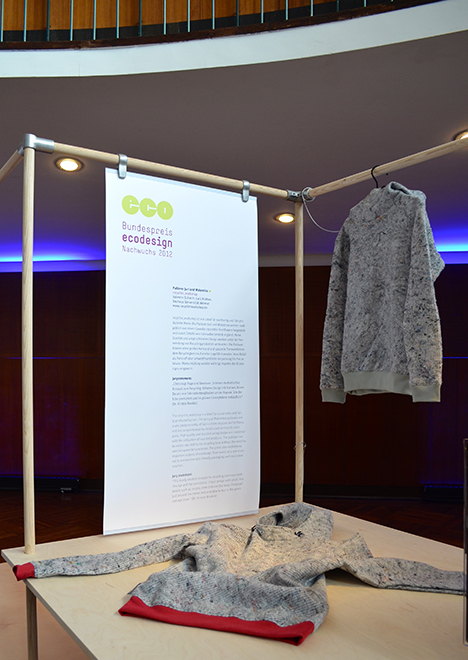 Sweaters made of recycled felt by the recyclist_workshop

The recent Ecodesign exhibition received no fewer than 140 entries but only a handful of them made it to the exhibition in Munich. Luckily, poster presentations explained the 14 winning products in detail (which can be seen here). Nevertheless we hope that this year's Ecodesign competition features more tangible entries. More information about the competition is available at the Bundespreis Ecodesign website (in German). 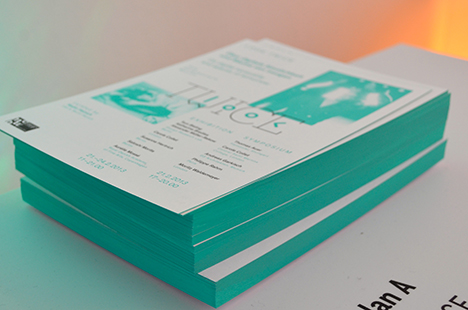 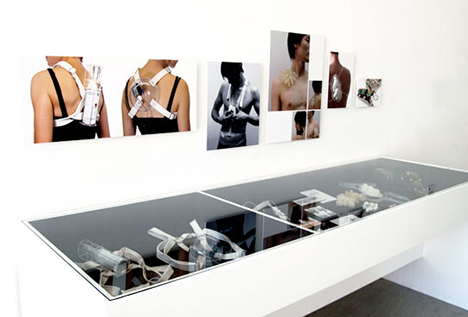 Prostheses for Instincts by Susanna Hertrich

The LOOK TWICE exhibition by We Are Plan A featured adaptive installations and objects that explore the digital sensuality and space of the future. A dozen young design researchers are exploring the design potential of new technologies. Susanna Hertrich's "Prostheses for Instincts" is a good example: Based on existing technologies and speculative scenarios, this project postulates the idea of the prosthetic device. The electronic extensions of the human body induce haptic stimulation similar to natural instincts, which enables people to feel abstract data. 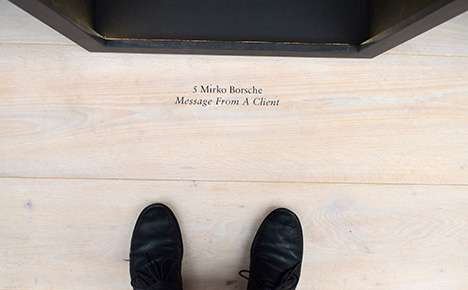 The "Rejected" exhibition by Atelier Steffen Kehrle put a spotlight on 11 design studies and prototypes that were never realized, cancelled due to economic crisis, or were never revealed to the public. The objects, pictures and even client emails (rants) were presented with style as matte black coffins. 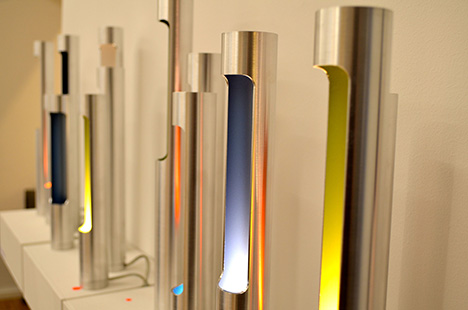 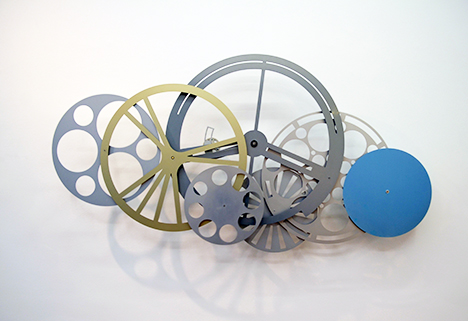 At gallery Filser & Gräf, we enjoyed the "7 Kilo Aluminum" exhibition that brings together the works of seven Munich based designers. Each designer was challenged to use 7 kilo aluminum as a starting point for their ideas, which led to surprising results such as the colorful lighting tubes by Sebastian Frank. We love the silent animation of the "New World Order" wall sculpture by Konstantin Landuris that appears like a never-ending clockwork (see the wall sculpture in motion here). 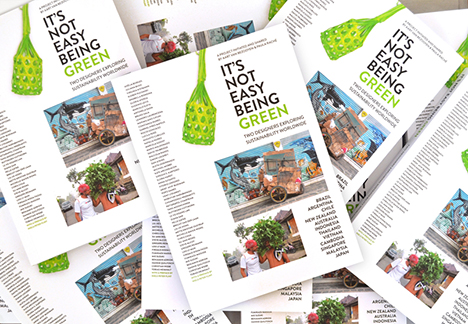 During the Sunday Lectures, designer Paula Raché and myself, Aart van Bezooyen, asked ourselves "What can designers do for a better future?" and shared our worldwide journey, in which we personally visited people and projects in twelve countries (some of this research was chronicled here on Core). We are sharing our discoveries with contributions of almost 60 designers, entrepreneurs and change makers in a new book that can be acquired via the It's Not Easy Being Green website. 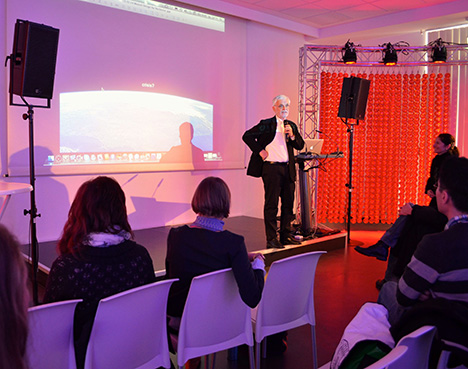 Professor Ezio Manzini from the Politecnico di Milano took a closer look at the "design in the crisis" (not for the crisis, since we are already in the middle of it all). He compared our shift towards a sustainable society with the historical shift towards an industrial society, examining innovation from a technological, social and cultural perspective, stressing the importance of collaboration between people and the advantages and so called "error-friendliness" of a more distributed system. Eco-design consultant Ursula Tischner gave us a preview of an upcoming platform that is based on today's crowd funding initiatives with the goal to facilitate sustainable initiatives from idea to realization. The so-called "Innonatives" program is schedule to be launched in Berlin upcoming June, so stay tuned [Ed. Note: We're excited that Manzoni is the jury captain for the Service Design category of the 2013 Core77 Design Awards, open for entry through March 15.] 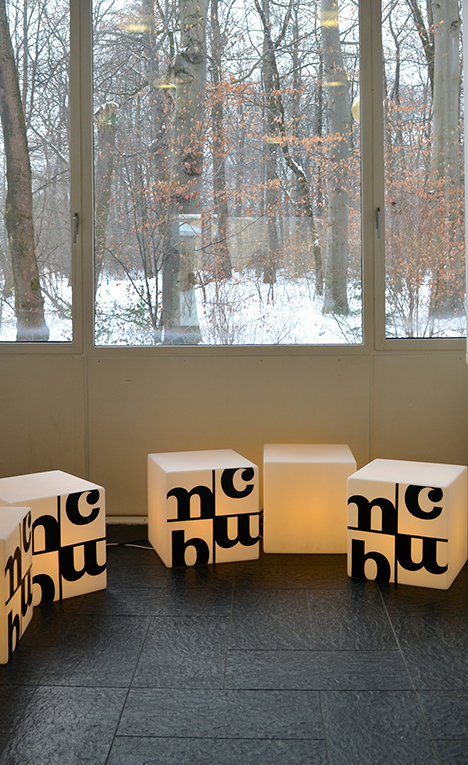 After the show is before the show...

All in all, the second edition of the Munich Creative Business Week brought together a lot of inspiring people and projects. As with any new event, the second year saw some growing pains, but by setting the goal to be(come) Munich's leading design event, there's reason enough to look keep a curious eye on next year's MCBW.