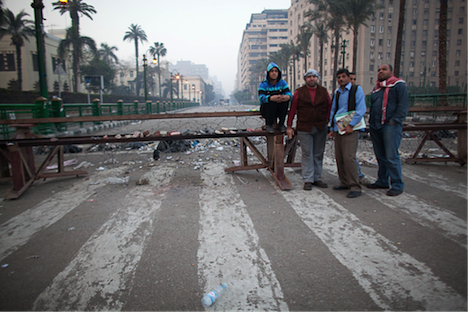 A frog team spent a week in Cairo for client research, workshops and keynotes shortly after the revolution. Our team of six worked out of a downtown hotel, syncing with three local guides over breakfast, before hitting the streets. It's good to have time to calibrate to the city, especially one that has gone through so much disruptive change—there's freedom in the air, and most people that we've spoken to recognise that the hard work in building what-next is yet to come. Tahrir Square is alive with the sounds of debate, face painted kids, and the detritus of protest.

A critical aspect of any project is the ability to set and manage expectations, which is often framed in terms of clients wants and needs. The week in Cairo comes with another set of expectation setting—helping colleagues and family understand what the team is up to, and appreciate that the news headlines represents a tiny sliver of what is going on the ground. I'm not surprised at the number of emails expressing concern, and I know how easily events in a far away land can spiral into a cycle of rumours that elevate danger and risk.

A long time ago, I realized that you should never ask the question to someone in the organisation if you're not willing to listen to and act on the answer. The consequences of questions about security in any organisation is that someone's job is (ostensibly) on the line if things turn south—and organisations are inherently risk averse. This is a problem if the decision makers don't understand the risks on the ground—hence the need to be proactive about setting the tone of the conversation.A nimble innovation consultancy like frog faces more nuanced issues than my previous employer, the 115,000 employee organisation Nokia—frog thrives on pushing the boundaries, and an understanding of opportunities and risk is inherent in our work and how we approach problems, and the advice we give clients.

So how did we handle this on a business trip/field study?

Frankly, by far the biggest risk in a city like Cairo, Calcutta or Chongqing is getting in a traffic accident, and this is an omnipresent threat, from every time you travel to an interview to simply crossing the street. Cairo is still far safer for violent crime than Chicago, New York City or Los Angeles, and more so compared to many sleepy European cities.