Steelcase Study Concludes We're Sitting Differently as a Result of More Objects. Time for a New Kind of Chair? 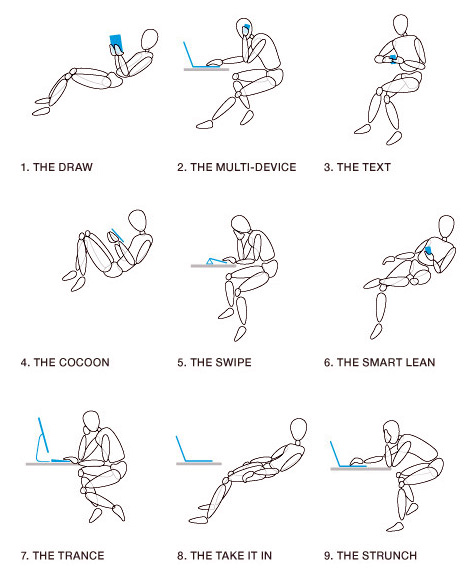 Steelcase has announced that they've been studying what many of us have undoubtedly noticed: These days we do a lot more in our chairs than sit and type or mouse. With smartphones and tablets taking an increased role in our workflow—think of how many times a day you're interrupted by texts or the Facebook updates you've routed through your phone to get around your company's broadband blocking—we're leaning back, shifting, and fiddling with devices that aren't part of the work surface.

We undertook a global posture study in 11 countries, observing 2000 people in a wide range of postures, and uncovered nine new postures as a result of new technologies and new behaviors. We studied how the human body interacts with technologies and how it responds as workers shift from one device to another. Research revealed ergonomic implications that, if not adequately addressed, can cause pain and discomfort for workers.

They've distilled their research into an ultra-flexible (figuratively speaking) chair called the Gesture, which is slated for release later this year. We assume they're still working out the kinks, as all we've got for now is a teaser video:

I don't know if all nine of the positions illustrated above are truly new, but I have to admit I do five of them on a daily basis. (How about you?) Also, I'm looking forward to a future video where they demonstrate how the Gesture fits in with these positions.