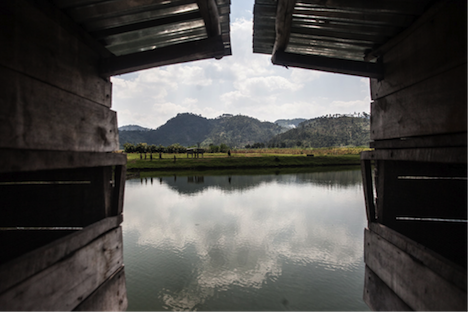 Over the last decade I've seen an increasing number of multinationals target highly financially constrained consumers in countries like India, China, Brazil, Nigeria and Rwanda (where these pictures were taken) reflecting both a wider awareness and appreciation of business opportunities of this market segment. The very particular ethical issues of working in financially constrained communities are covered in this essay, and suffice it to say, these consumers are arguably some of the most demanding consumers on the planet. Given that these countries have significant agrarian populations, how does ethnographic, corporate rural research differ from similar contextual research conducted in urban settings?

A "rural" community spans a significantly wide diversity of peoples, cultures, faiths and ethnicities. The infrastructure can vary considerably from dirt roads to paved, electricity to off-grid, cell towers and data connectivity, water from jerry cans or the mains. A single farming community can encompass a wide range of incomes from subsistence living through to satellite TVs and four-wheel drives. The size of farms; the crops that are planted, the livestock that is tended; the extent to which agricultural or husbandry expertise is available; whether it has been a good season; the timing of the next harvest; flows of knowledge and income relating to the level of urban or international migration (especially near border areas); access to credit; can all have an impact on who the research team will engage with, and how the research will be conducted.

The first issues arise during the project planning and relate to logistics.

Assuming the country has already been selected, how to choose one rural location over another?

Tapping the knowledge of organisations that already operate on the ground can help feel out the nuances of different geographic regions and can provide invaluable advise on access, introductions and existing authority structures and provide a sense of who is already doing what on the ground. An organisation's willingness to share often includes an element of quid quo pro with the promise of some form of share back at a later date—this spirit is not always apparent in commercial projects.

Before the team arrives, Google maps and its ilk are good for remote sensing a country to understand the type of roads (asphalted, dirt) the dynamics of a city, town or village right down to the type and density of neighbourhoods, homes, communities, farms. Backed up by analogous on-the-ground experience satellite images can be very effective at cross-checking other data sources. Commercially available photos from satellites or planes can be obtained if the team requires something specific, including very high resolution imagery. Having a sense of the terrain helps focus the research planning and provides an early taste of 'being there', especially useful in acclimatising team members that haven't travelled to the region.On the ground, the primary logistical issues relates to the amount of time and effort in getting into the rural contexts within the corporate timescale—with a week or weeks on the ground conducting research, certainly not months in field. The main traffic arteries are likely to be asphalted so driving to regional urban hubs takes hours, but moving beyond these hubs much of the country is dirt-road with varying degrees of accessibility. I originally starting writing this article from South Sudan, a country with only 160km of asphalted roads, 100km kilometers on dirt roads can take half a day. In larger countries with more remote regions the journey can be measured in days, and heavy rains can make some roads impassable. Check the seasonal weather forecasts before you arrive—monsoon, typhoon and hurricane seasons can all be highly disruptive.

It is useful to think in terms of the friction that is inherent in the locale that will impact the type and volume of research that the team wishes to conduct. Its tempting to associate friction with graft/bribery but I prefer to use a broader definition that adds up to additional amount of time and effort required to get things done—language, dialects, costs, local transport options, weather variability, an ability to hire competent local guides all impact what can be achieved day-to-day. The margin of error for a journey across Tokyo can be calculated to the minute, in London 20 minutes, in Jakarta an hour or more. Indian cities have a friction of about 20%, whereas in India rural locations fall into the 25 to 40% range. Some friction, such as using time waiting at a checkpoint to chat with the local police can create opportunities for research but generally speaking it is useful to think of friction as unproductive time. Friction can be partially mitigated with the right local team, a shared awareness of the day's goals, and knowing how to make the most of a flexible schedule.

The rural tempo is generally slower which affords numerous opportunities for turning intercept interviews into long discussions, but will frustrate a team that is still running on by-the-clock corporate time. More traditional rural locales are more likely to run on event time where the current activity or event takes precedence what might appear on a watch face or in a calendar. While you may be used to scheduling appointments within a fifteen minute window, your participants may be more used to thinking in terms of an hour, or two, or three. (There is significant cultural and personal differences in how people deal with time—your local crew should give you a heads up on local norms). Schedule less, build in more time between research activities and work opportunities when they arise. The team will do well to get their heads and hearts around local scheduling norms.

In some countries government permission is required to conduct research, a process that can take days or months to obtain depending on the research topic and the region. Successful applicants will receive a letter of approval which, if playing by the rules should be shown to local authorities on arrival. It doesn't take long for news of the research team to spread and while it is always possible to get away with researching without formal approval, the consequences of discovery may impact the client. Our team was recently based out of Musanze Rwanda, close to the Democratic Republic of Congo border where the where the M23 rebels are very active in the area (the team tried to cross into Goma were turned away at the border without too much hustle, which was unfortunately because the hustle allows the researcher to hone their skills). There was, understandably a heightened sense of awareness of outsiders.

Even with the official letter approval at the village or district level may take a couple of days, making it desirable to have an advance party that arrives before the rest of the team. At the village level it is anyway common to pay respects to the local authority figures such as tribal chief before commencing. Other advanced party responsibilities include finding just the right accommodation and scouting suitable participants. Official approval may come with the assumption that the team is aligned with and reporting back to the authorities.

Take essential supplies: drinking water; batteries for at least two days work; sunblock and energy food. These days internet access is often available through the mobile phone network and setting up a wifi hotspot, and many operators supply cellular dongles for local data-only plans. Egypt can deliver high-speed 3G internet in the middle of the desert whereas many parts of South Sudan still have limited or no connectivity.

Above photo: a evolved local design solution: a rabbit hutch sits above a fish farm pond, the rabbits are fed cut stalks and grass and they supply the fish with digested food pellets.