VarStiff, a New Hard/Soft Material. Never Mind the Medical Applications--What Can We Designers Do With It? 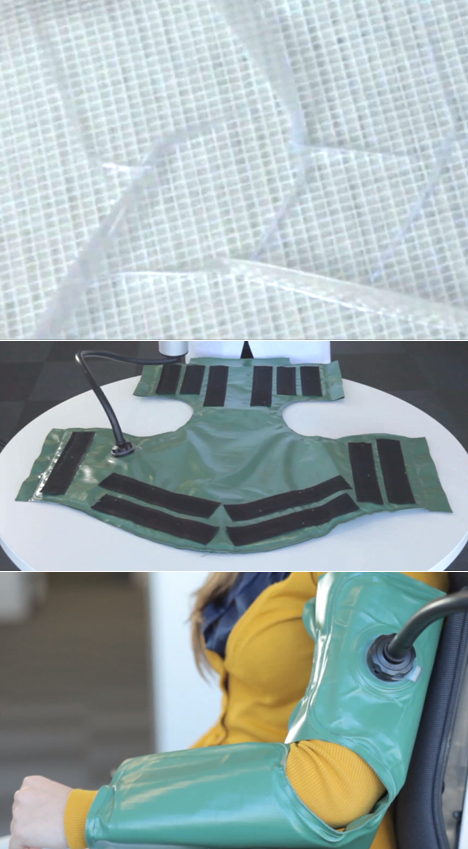 A Spanish company called Tecnalia has developed a new type of fabric that can be made to go from soft to hard and back again. Called VarStiff, the material's default state is soft, like regular fabric; but attaching a vacuum to an embedded valve and sucking all of the air out turns the material rigid, "[achieving] hardness equivalent to that of a conventional plastic." To get it soft again, re-introduce air.

Early target applications are medical, with plans to incorporate VarStiff into an easily-applied, easily-removable cast. But the industrial designer in you has got to be wondering: Could the surface be treated with something that could withstand molten plastic, so that we could use it as a mold? I also wonder if it could be used in some kind of clamping capacity in a shop, providing temporary stiffness around hard-to-join, irregularly-shaped parts.

I'd also like to see just how stiff it can be made. If it could be used to create furniture, shipping and moving it would be a lot easier. And imagine a skateboard that you could roll up and toss into a backpack; two trucks connected to a flexible bag takes up a heckuva lot space than an entire deck. Then again, you might have to carry a Dustbuster around to activate the thing.

Anyways here's a video—Spanish language only—providing a teaser look at the stuff:

VarStiff, a New Hard/Soft Material. Never Mind the Medical Applications--What Can We Designers Do With It?